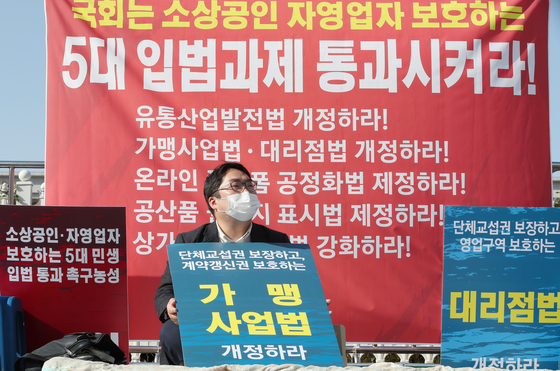 Protestors on Monday demand amendments to the current retail law as well as other legislations in front of the National Assembly. [NEWS 1]

The controversial regulation that for the last eight years has forced large discount stores to close on some Sundays has led to financial losses for the small merchants dependent on supermarket customers, according to the Federation of Korean Industries (FKI) on Tuesday.

According to the FKI, 98.7 percent of the 150 of small leased stores inside large supermarkets surveyed in Seoul and Gyeonggi responded that they are small businesses with less than five employees.


The small business owners took a direct hit from the government’s regulation on big supermarket chains.

The government in 2011 passed an amendment to the Distribution Industry Development Act, prohibiting large supermarket chains and other large stores from opening within 1 kilometer (0.6 miles) of a traditional market. Since 2012, supermarket chains have been required to close for two days every month.

In July, a total of 12 amendments to the retail law were pending at the National Assembly that would expand the subjects of the mandatory closure to department stores and malls, which rely heavily on weekend sales.

Among the leased stores, 86.6 percent responded that their sales decreased due to business restrictions that require them to take breaks during two weekends every month and prohibit them from running their business late at night.

Reduced access to customers due to restrictions on supermarket chains was the most common area of difficulty that respondents identified. Other difficulties included increased interference from nearby merchants, restrictions on business hours and unfair competition with stores not subject to the restrictions, such as grocery stores.

People who run rental businesses have been suffering from both business restrictions and the coronavirus pandemic. The 150 leased stores all replied that they suffered from a decrease in sales, with the average rate of decline at 37.3 percent. During the second half of the year, 90.6 percent of stores projected a decline in sales compared to last year.

In terms of measures to counteract the decline in sales, 54.4 percent responded that they need to reduce everyday expenses. Other answers suggested an impact on the workforce, as they said they may need to cut back on employees or reduce pay.

Merchants said removing the forced weekend closures would help them overcome the economic difficulties posed by the coronavirus pandemic and continue to grow. They also mentioned that they would rather have the required breaks on weekdays and that business hours of supermarket chains should be longer than stated in the amendments. They added that digital transactions must be permitted during banned hours and required holidays.

“There needs to be a system in place so that leased stores within discount chains are not at a disadvantage just because of their location,” said Yoo Hwan-ik, head of corporate policy at the Federation of Korean Industries (FKI).

“Considering the changing retail environment, which has seen a dramatic spike in online sales, the mandatory closure must also be abolished. There needs to be a measure that can minimize the impact of the regulations that target offline supermarket chains, such as allowing digital transactions on holidays.”