Korea’s largest fried chicken chain closed its initial public offering (IPO) subscriptions Wednesday, taking it one step closer to being the first restaurant franchise to be listed on the Korea Exchange as a Kospi stock.

Kyochon shares were oversubscribed 1,318.29 to 1, which is higher than the subscription rate of Big Hit Entertainment, one of the most anticipated IPOs of the year. The subscription rate is not an indicator of value and the prospects, and can sometimes indicate mispricing of shares by the underwriters and the company.

A total of 9.4 trillion won ($8.3 billion) deposits were collected from retail investors.

Kyochon’s shares were offered at 12,300 won each, around 10 times the company’s 2020 estimated earnings per share. This is close to the market average for other companies in the food industry, according to analysts.

The fried chicken brand will become the first restaurant franchise to be directly listed on the exchange once it starts trading on Nov. 12.

Mr. Pizza and barbeque restaurant Didim trade on the Kosdaq, but they went public through back-door listings.

“Kyochon is expected to show steady growth through its market power in the Korean fried chicken market,” said Park Jong-sun, an analyst at Eugene Investment. “Their franchise stores have the highest sales revenue but the lowest closure rates. The company will show both qualitative and quantitative growth by adding new concept stores and entering into the home meal replacement market.”

The average annual sales at Kyochon stores was 620 million won in 2018, almost double the average sales figure for competitors, according to Shinhan Investment. 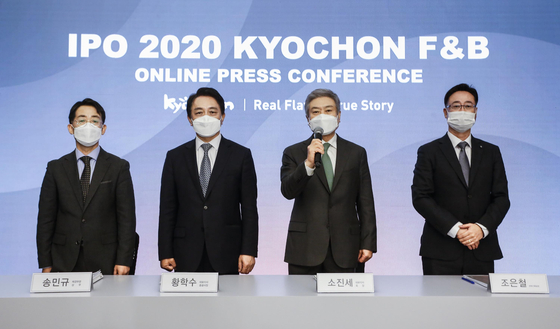 Executives from Kyochon F&B attend a press conference ahead of its initial public offering in October. [KYOCHON F&B]


The company said in a press conference in October it plans to bring sales to 100 billion won by 2025 through expansion into overseas markets, adding new stores locally and diversifying their product portfolio to include processed chicken products and beer.

Some analysts were skeptical of Kyochon’s long-term prospects, as it's still far from being the dominant player in a market where options are growing each day.

“It is a good company for sure, but I wouldn’t say it has a strong grip on the market,” said an analyst from Kiwoom Securities, who requested anonymity.

“Other competitors like BBQ and BHC are closing in. They are just a couple of percentage points away in terms of market share. The company was also late to enter the home meal replacement market. If it wants success overseas, it needs to dominate the local market first, which I think will take time.”

The company is still a minnow in the global markets. Sales generated overseas only accounted for 2 percent of its total last year, and it will take a while for foreign markets to significantly increase profits for the company, says analyst Park Joo-young of Sangsangin Investment & Securities.

The funds raised through the IPO will be invested into building its Pangyo headquarters and the company’s logistics center in Pyeongtaek, Gyeonggi, and partially to redeem company debt.

Kyochon F&B will make its Kospi debut on Nov. 12.