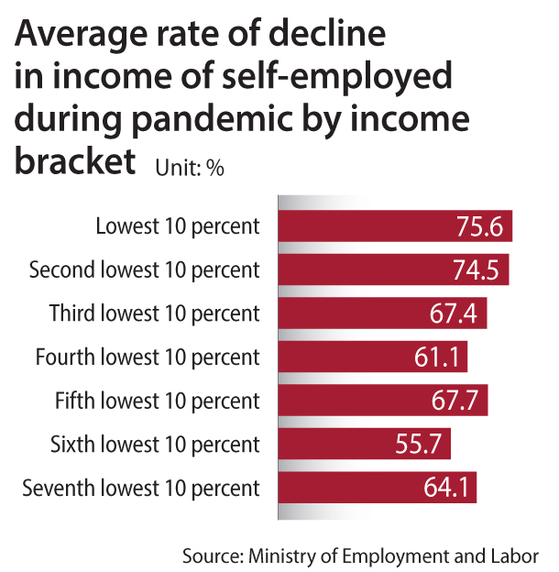 The self-employed and freelancers suffered a 70 percent on-year decrease in income during the pandemic, according to the Ministry of Employment and Labor on Monday.

The ministry said 1.76 million people applied for the first batch of emergency employment relief grants, and 1.49 million eligible people received the aid. The relief measure aims to support financially vulnerable populations, including self-employed business owners, freelancers, private tutors and door-to-door salespeople, with 500,000 won ($440) disbursed every month for a maximum of three months. People who suffered more than a 25 percent loss in their income due to the pandemic are eligible for the aid. Applicants submit personal financial statements to confirm the decrease in income.

The aid was part of the government’s fourth supplementary budget, which was approved in September. The budget focused on self-employed businesses that were hit hard by the resurgence of the virus since mid-August.

Among the applicants, 62.5 percent of them were small business owners. One-third of the applicants, or 587,000 people, were freelancers and door-to-door salespeople. The third biggest group of applicants were those laid off and without income, which accounted for 4 percent, or 71,000 applicants.

While freelancers and self-employed people on average lost two-thirds of their income, insurance salespeople suffered a drop of 56.1 percent, and private tutors 56.4 percent.

The grants focus on lower income households hit hardest. Around half, or 46 percent, of the recipients of the grants were in the bottom 20 percent income bracket, and 83 percent of the recipients were part of the bottom 40 percent. Instead of the universal welfare of first emergency relief grant, the selective financial support targets the financially vulnerable population.

Some experts say that in order to provide government aid as quickly as possible to those most in need, a structural foundation is needed, including a fairer tax system. When there is difficulty in accessing the information on income, prompt emergency aid also becomes a challenge.

“There are members of the lower-income group whose income cannot be confirmed,” said Kim Dong-won, a former economics professor at Korea University. “There needs to be a digital system that identifies the neglected population so they are not the last in the government’s priority when it is giving out aid.”

Performing arts in a pandemic