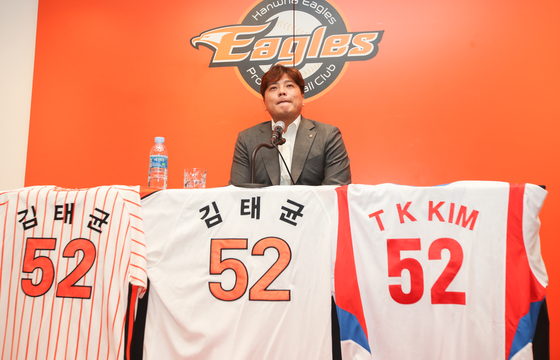 CHANG HYE-SOO
The author is the head of the sports team.


Every year on April 14, all Major League Baseball players wear the same number, 42. On April 15, 1997, all MLB teams permanently retired uniform number 42 to commemorate the 50th anniversary of the major league debut of first Black MLB player Jackie Robinson (1919-72) with the Brooklyn Dodgers. Seven players who had used uniform No. 42 kept the number. Mariano Rivera of the New York Yankees, who retired in 2013, was the last player to wear No. 42.

The first retired number in sports was No. 6 in the National Hockey League (NHL), used by Toronto Maple Leafs’ “Ace” Bailey (1903-1992). The right winger suffered a head injury during a game in 1933 and retired the following year. The NHL held a charity event to raise funds for his treatment, which later became the all-star game. His jersey number was retired. Korea’s retired number was OB Bears’ Kim Young-sin’s 54 in the Korean Baseball Organization (KBO). When he passed away in 1986, his number was retired. He was a second-year player. A number may be retired to commemorate an accomplishment or to remember a death.

Recently, two professional athletes have been honored with the retirement of their jersey numbers. Baseball player Kim Tae-gyun’s No. 52 and footballer Lee Dong-guk’s No. 20 have been retired. Kim 38, joined Hanwha Eagles in 2001, and except for the 2010-11 season he played abroad, he only played for Hanwha. That’s the fourth for the team, and the 14th in the KBO. Football player Lee Dong-gook, 41, made a professional league debut in 1998 with Pohang Steelers and has been playing with Jeonbuk Hyundai Motors FC since 2009. Founded in 1994, Jeonbuk won for the first time in the year when Lee joined and won the title eight times, including this year. In the K League, only two numbers have been retired, 16 for Kim Ju-song of Daewoo Royals and 20 for Lee Dong-gook.

Riding on the mood celebrating the semi-final round advancement in the Korea-Japan World Cup in 2002, Busan IPark retired Song Jong-guk’s No. 24 in his second year with the football club. Song moved abroad and returned, joining another team, the Suwon Samsung Bluewings, in 2005. Until he retired, he played against Busan IPark. In 2007, Busan reversed his number’s retirement.

There is a swordsman — Prosecutor General Yoon Seok-youl — who aimed his blade at corruption and deep-rooted evils. Ruling party lawmakers — who were once quite impressed by his claim that he is loyal to the organization, not to politicians — are likewise canceling their respect for him after he digs up their faults. They are just like the football clubs that unilaterally retired a number and reversed it later after he competed against it.