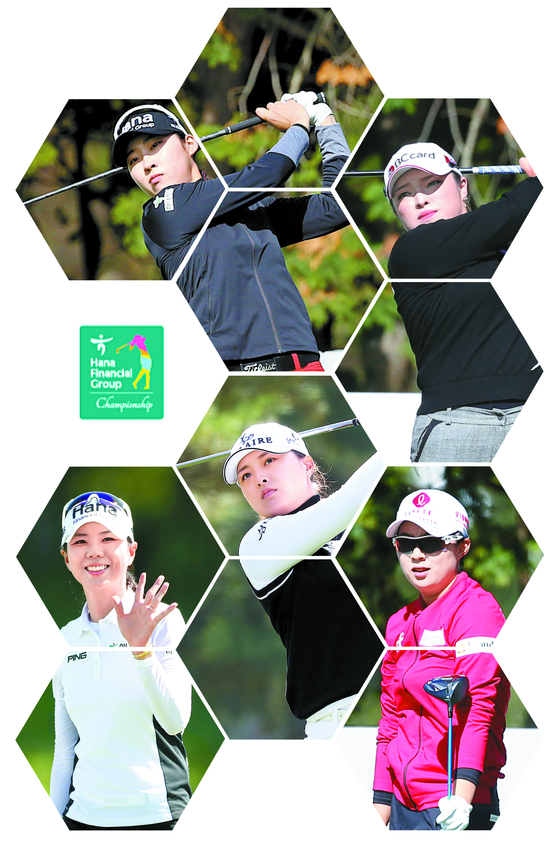 
The KLPGA Tour’s Hana Financial Group Championship will tee off on Thursday.

In the 2020 edition of the Hana Financial Group Championship, a total of 96 players will be competing for the title, playing from a total of 6,474 yards at Sky 72 Golf & Resort in Incheon. The tournament will offer a total prize pot of 1.5 billion won ($1.3 million), with the winner taking home 300 million won.

With the season approaching its end, this is already the 17th tournament on the KLPGA Tour.

As the tournament has a big prize pot, the result could cause some last-minute changes in the Tour’s year-long rankings.

Unfortunately, not all 96 players will take home some winnings as there will be a cut after the first two rounds, with only the top 60 players continuing.

Due to the coronavirus pandemic, not all of the Team Hana Financial Group players were able to return to Korea for the event, but the field is still just as competitive as previous years. This year’s edition of the tournament is also being played later than last year, so the players will have to fight against the cold weather.

Most important of all, the tournament will once again be played on an empty golf course.

After three weeks off, world No. 1 Ko Jin-young will return to the KLPGA Tour stage once again. Due to the coronavirus, Ko is one of many Korean golfers that has chosen to compete on the KLPGA Tour rather than the LPGA Tour this season.

However, she didn’t compete in as many tournaments as the others as she has only appeared in five KLPGA Tour events and made the cuts in all of them. Prior to this tournament, Ko competed at the KLPGA Tour’s last major tournament of the season, the KB Financial Group Star Championship, finishing second.

“Firstly, I want to thank the sponsor for giving the opportunity to the players, even by changing the dates of the tournament,” Ko said. “Since it’s a tournament being held in Incheon, it’ll be windy, the course is longer and the rough is tough. I’ll adjust to it as I play the practice rounds. I’ll try to play my best and rather than thinking about the standing, I’m just going to focus on my play.”

While Ko’s appearance threatens the field as she is the world No. 1, the tournament gets even more competitive with defending champion Jang Ha-na. Jang is entering the tournament at the top of her game as she just picked up her first win of the season on Sunday, at the SK Networks Seokyung Ladies Classic in Jeju.

This is already Jang’s 13th victory on the KLPGA Tour and, considering her strength toward the end of the season, expectations are high. Her victory on Sunday allowed her world ranking to move up nine spots to No. 25.

“As I enter the tournament as defending champion, the quote ‘The one who wants to wear the crown bears the crown’ came into my head,” Jang said. “But it’s the pressure that I can feel only from that spot, so I want to overcome the pressure and play well.”

But just like Ko, Jang also mentioned the cold weather and the tournament starting later than usual. When it comes to cold weather, Jang has been especially strong, as seven of her 13 KLPGA Tour victories were won in the fall.

“Since the tournament is being held later than last year, the cold weather and the wind is expected to be another variable,” Jang said. “It’ll be important in the competition as to who adjusts to the weather and the course quicker. Since I won last week, I feel a little more comfortable and my shots have gotten better. So I’m going to concentrate more and try to finish within the top 10. I’m going to focus especially on iron shots to finish toward the top of the ranking in greens in regulations and average scoring.”

For this season, Jang is ranked fifth on the KLGPA Tour’s yearly scoring average and third in greens in regulations standing.

World No. 10 Kim Hyo-joo will also continue to appear on the KLPGA Tour this weekend. Having already picked up two wins in the KLPGA this year, Kim seems to have found her old form this season. With two victories, she is ranked first on the KLPGA Tour’s money ranking, as well as the scoring average for the season.

Despite the weather cooling down, she’s been consistent as she finished runner-up at the SK Networks Seokyung Ladies Classic just last weekend. Kim has competed in 11 KLPGA Tour events this season and has made the cut in 10 tournaments, good enough to put her second in top-10 finish percentage.

“Just as any other event, I’m going to try to play my best during this tournament,” Kim said. “Rather than being greedy, I’m going to focus on one shot at a time and challenge myself to finish within the top 10.”

These three players are expected to receive the most spotlight as they will be playing in the same group, teeing off at 10:50 a.m. from the first hole.

The Hana Championship will be played on Sky 72 Golf & Resort's Ocean Course, known for its long par 3s and par 4s. The Ocean Course also has a lot of hazards and a lot of changes in gradient, adding to the challenge. Course management skills are likely to be crucial for golfers that want to stand out from the pack at the tournament.


Looking at Team Hana, rookie Kim You-bin has set high expectations. At the SK Networks Seokyung Ladies Classic, Kim started out the first two rounds as surprise leader. Although she isn’t a huge start like some of her competitors, the rookie has been improving her condition to finish her season strong.

“With my condition up to par, I’m excited as to how this tournament will turn out,” Kim said. “Since this is my first time competing at my sponsor’s tournament, I do have some pressure, but I’ll try not to get too nervous and play my best.”

Although Kim has now lost her shot at winning the rookie of the year award, she’s been one of the most consistent rookies, ranking fifth at 875 points. Kim made the cut in 12 out of the 15 tournaments she’s competed in so far this season.

Kim will start her first round at 9:40 a.m. from the first hole, playing alongside Ahn Song-yi and Heo Da-been.

Along with Kim, veteran Heo Yoon-kyung will also make her appearance at her sponsor’s event. Playing her 10th season on the KLPGA Tour, this is expected to be Heo’s very last event as she announced her retirement as a pro golfer. Throughout her KLPGA Tour career, Heo has picked up three wins.

Heo will play her first round from the first hole starting at 9:50 a.m., playing along with Oh Ji-hyun and Kim Min-sun.

China’s Sui Xiang will compete at this week’s tournament as she is also part of Team Hana. This is her first KLPGA Tour event of the season and she is competing under invitation of her sponsor.

Adding more depth to the field, KLPGA Tour stars like Choi Hye-jin and soon-to-be Rookie of the Year Ryu Hae-ran will also compete.

Choi is still awaiting her first win of the season. Having won five tournaments throughout the 2019 season, Choi is yet to pick up a win, but when it comes to consistency, she’s been at the top of her game. Choi is ranked first in the Tour’s top-10 finish percentage at 92.8571, allowing her to top the KLPGA points standing at 429.

Impressively, Choi made the cut in all 14 tournaments she’s competed in this season.

Choi will play her first round from the first hole, starting at 10:10 a.m., along with An Na-rin and Kim Ji-hyun.