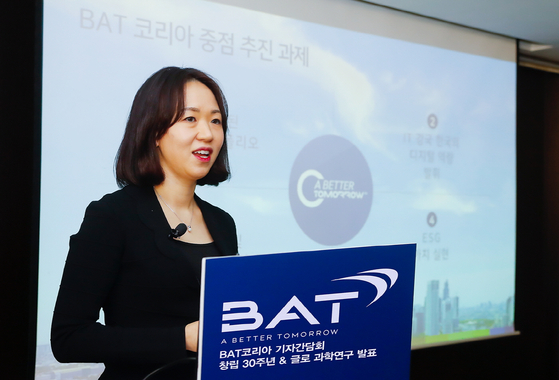 A total of 13 toxicants were reduced, the company said, including nicotine, cotinine and aminopathalene.

The conclusions came from a scientific study of glo that began in May 2019 in Britain. More than 500 people in Britain took part in the studies. These results came from three months of trials. The results of the full study, which took place over a year, are scheduled to be released in 2021.

“The slogan of the BAT Group, ‘A better tomorrow,’ represents [the company’s ambition] to create a better future by reducing the harm our business imposes [on people’s health] through satisfying and less damaging products,” said Kim Eun-ji, BAT Korea’s country manager, during a press event held in central Seoul on Thursday.

It was Kim’s first meeting with the press since she was appointed to the job in July. She is the first female leader of a Korean tobacco company.

BAT Korea “will become a company that can positively affect not just the industry, but also consumers, society and employees while realizing this vision,” Kim added.

In celebration of BAT Korea’s 30th anniversary this year, the company announced that the group’s goal is to have 50 million customers for its non-combustible products globally by 2030. Currently, 13 million people worldwide use its e-cigarettes.

“It’s true BAT’s performance hasn’t reached expectations over the past several years," Kim added. "But our market share has grown from 11.97 percent in late 2019 to 12.19 percent as of this month.” Kim said BAT Korea’s factory in Sacheon in South Gyeongsang will export $400 million worth of products this year, largely to Japan.