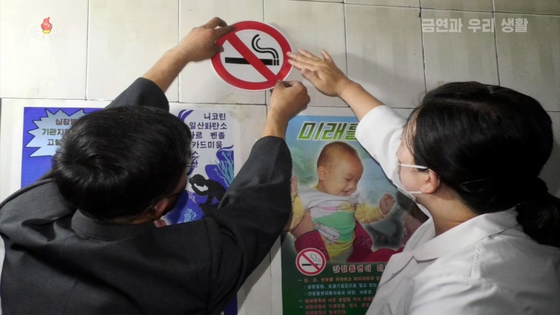 Workers of an antismoking clinic in North Korea put up antitobacco stickers on a building wall, as seen on footage from Korean Central Television. The country is conducting various antismoking campaigns to curb rampant tobacco use especially among its male population. [YONHAP]


North Korea approved a sweeping new antismoking law strengthening punishments for public tobacco use, state media reported, but there are doubts that the rule will apply to the country's supreme leader, himself an avid smoker.

Also mentioned was that penalties would be imposed for violating such rules, though no details were provided on exactly what such punishments entail.

Legal and social controls on the production and sale of cigarettes were also tightened in order to create “more cultured and hygienic living environments,” the English-language report read.

This is by no means the first time Pyongyang has attempted to crack down on smoking in the country, where around 44 percent of men are smokers, according to the World Health Organization’s data from 2014. Smoking is considered taboo for women, however, leading far fewer of them to consume tobacco.

In 2005 the regime instituted an antismoking law that banned indoor smoking, but inadequate enforcement rendered it ineffective in curbing the country’s high smoking rates.

The World Lung Federation’s Tobacco Atlas estimates that in 2010 smoking was a leading cause of death in the North, contributing to around 34 percent and 22 percent of deaths among men and women in the country, respectively.

This has taken a toll on the country’s productivity, and the regime has worked to wean its men off the cancer-inducing habit through national campaigns and regulations. The Presidium’s new law appears to be aimed at raising compliance levels on the earlier law from 2005.

Ostensibly, the prevalence of cigarette smoking in the North is not much significantly higher than its richer neighbor, South Korea, where the male smoking rate stands at around 31.5 percent, according to the South’s national statistics agency.

But Seoul has been more successful in curbing that rate with a series of public campaigns and toughened restrictions throughout the years. According to data from yearly national health surveys conducted by the Ministry of Health and Welfare, the male smoking rate has fallen from 66.3 percent in 1998.

The smoking rate for men in the North may be partly driven by the fact that its leaders and elite are often heavy smokers, and have been depicted as such in propaganda. 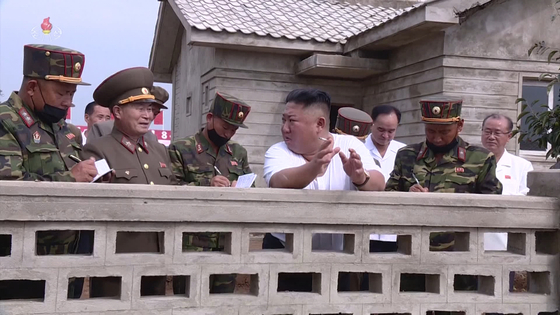 
North Korean leader Kim Jong-un has made no secret of his love for smoking, frequently photographed having a cigarette in his numerous guidance visits across the country, even at day cares and schools.

Given Kim Jong-un’s status as his country’s unassailable leader, it's unlikely he will be stopped or punished in line with the new law. But analysts in Seoul noted the North’s propaganda machine may try to filter out scenes of the leader with a cigarette in his future depictions, to reinforce the rebranding of the North as a “normal country.”