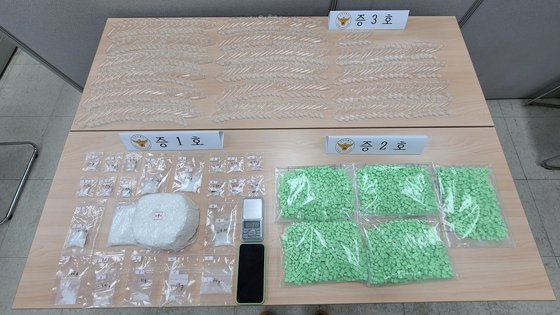 Methamphetamine and MDMA seized by Gyeonggi police from a drug bust of a Chinese cartel operating in Korea's greater capital area. [GOYANG POLICE]


Eight Chinese suspects have been detained in connection with a drug bust that netted 42 billion won ($37 million) in drugs, including methamphetamine, Gyeonggi police announced Thursday.

According to the Goyang Police Precinct, a 33-year-old man and a 31-year-old woman were among the eight Chinese nationals taken into custody for violating the country’s antinarcotics law.

The 33-year-old man is believed to have overseen a major narcotics distribution network that sold drugs to Chinese people living in Seoul and Gyeonggi.

After apprehending the suspect with help from the National Intelligence Service (NIS), police discovered around 1.13 kilograms (2.49 pounds) of methamphetamine in his car, carrying what police claim is a street value of around 3.7 billion won. They also found 4,742 pills of MDMA, the drug better known as ecstasy, valued at around 470 million won.

The female suspect was carrying around 100 million won in cash, which police say may be proceeds from their drug operations.

“We have confirmed illegal drugs are being distributed across areas with dense Chinese populations, so we plan to increase monitoring in such areas,” said a Goyang police spokesperson.

“We also have intelligence that [the drugs] were brought [into Korea] from abroad, so we will also closely watch for distribution networks in collaboration with the NIS and customs offices.”

The suspects captured in the recent bust are believed to have primarily operated in Ansan, Bucheon and Shiheung, Gyeonggi; Guro and Yeongdeungpo Districts in Seoul and Bupyeong District in Incheon, all of which have large Chinese neighborhoods.

According to the police investigation, individual members of the organization were not acquainted with each other, meaning they operated not as a unified syndicate but as individual sellers taking orders from a single authority located in China.

The instructions were relayed through WeChat, China’s most popular messaging application, police said.

Illegal drug use among foreigners in Korea is on the rise, as the number of foreign workers in the country continues to grow.

According to the Supreme Prosecutors’ Office, a total of 1,529 foreigners were taken into custody last year for drug distribution or consumption — a figure around five times higher than that of 2011.

More than a third of the suspects — 551 — were from Thailand, followed by China, which accounted for 431 of the total, followed by Americans, Uzbeks, Russians and Vietnamese.