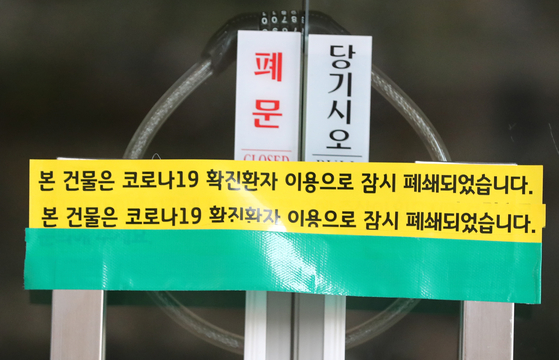 The entrance to a building where a call center in Cheonan, South Chungcheong, produced a cluster of at least 21 Covid-19 infections is shut Thursday. [NEWS1]


A call center in Cheonan, South Chungcheong, produced a cluster of at least 21 Covid-19 infections, as Korea's new coronavirus cases hovered in the triple digits for the second consecutive day Thursday.

The South Chungcheong Provincial Government said Thursday after a woman in her 40s working at a Shinhan Card and Shinhan Life Insurance call center in Cheonan was confirmed positive the previous day, 20 additional employees were found to have contracted Covid-19.

Local authorities determined that the call center had not been abiding by social distancing guidelines, working in enclosed spaces and not wearing masks. The office also did not provide soap in the restrooms for employees to watch their hands. Likewise, health authorities said after investigating the scene that the employees also shared meals together.

The call center took up the seventh and eighth floors of a building, which also houses 14 offices including a clinic, insurance company and beauty school. All the cases so far have come from the seventh floor.

The call center employed around 80 people, mostly women, while authorities are testing 170 people working in the building who were possibly exposed to the virus. The building was shut down.

The schools attended by the woman’s children also shut down that day, and her family and 46 of their contacts are under self-quarantine.

With a recent spike in new coronavirus cases, the cities of Asan and Cheonan raised their social distancing guidelines one notch, from Level 1 to Level 1.5 starting Thursday at 6 p.m.

Under the Level 1.5 guidelines, nine categories of high-risk facilities, including clubs, must require people to be spaced out by at least four square meters (43 square feet) per person, while 14 other types of facilities, such as PC rooms, must require limited entry and spacing out of seats.

In the past week, the cities of Asan and Cheonan recorded 78 new Covid-19 cases. South Chungcheong added 23 cases as of Thursday. 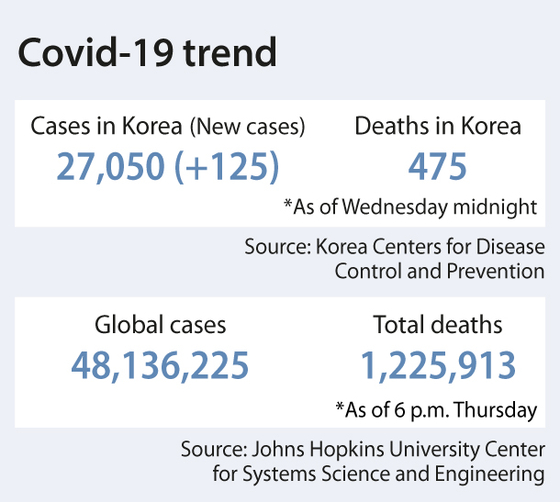 Asan added 10 new cases Thursday, including four people who had contact with a family of five that attended a relative’s wedding in Busan on Oct. 25 and got infected.

Korea added 125 more cases as of Wednesday midnight, bringing total patients to 27,050, according to the Korea Disease Control and Prevention Agency (KDCA) Thursday. There was one additional death reported, raising the total fatalities to 475.

Of the 108 local infections, 46 cases were in Seoul, 23 in Gyeonggi and three in Incheon.

This also marks the highest number of domestic transmissions since Oct. 23, fueled by clusters stemming from nursing homes and hospitals. But there have also been constant infections arising from small gatherings of families and friends.

About 1,000 people, including political and business leaders, visited Lee’s mourning altar at the Samsung Medical Center in southern Seoul. Authorities have responded by urging people who attended on Oct. 26 to get tested.

Korea University also shut down three buildings after a student who took a midterm exam on Monday contracted the virus. 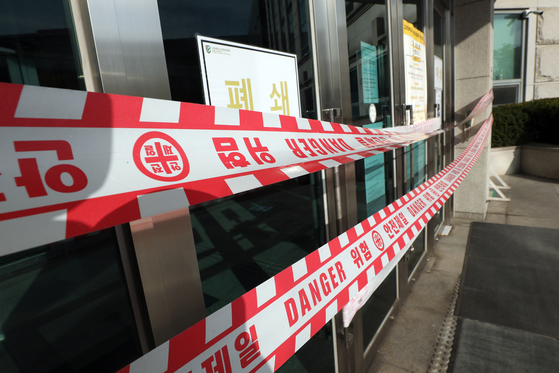 A life science department building at Korea University in Seongbuk District in northern Seoul Thursday is shut down after a student contracted Covid-19 earlier this week. [NEWS1]