The Hanwha Eagles have decided not to extend captain Lee Yong-kyu's contract.


The Eagles made the radical decision to part ways with veteran Lee as he didn’t fit into the bottom-ranked team’s future. Prior to the 2019 season, Lee signed a two-year contract, with an option for another year, at a maximum of 2.6 billion won ($2.3 million). 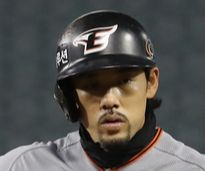 
The last few years have been tumultuous for Lee. Shortly after signing that two-year contract he asked the club to release him for a trade ahead of the 2019 season. When they refused, Lee went public with the story that his trade request was being blocked. In response, the Eagles benched him for the entire season.

One year later, the apparently redeemed Lee returned to the Eagles roster as captain, but now that his two-year contract is over the team has apparently had enough. After Lee had a talk with the general manager, the Eagles decided not to extend his contract for an additional year.

Lee returned strong this year, despite his unscheduled break last season, appearing in 120 out of 144 games for the Eagles and finishing with a 0.286 batting average with 120 hits, 32 RBIs and 17 stolen bases.

The decision marks the end of Lee’s six-year career with the Eagles.

Lee made his KBO debut all the way back in 2004 with the LG Twins. After one season with the Twins, he joined the Kia Tigers and played for the Gwangju club for nine years. He is known for his speed and regularly appeared as leadoff hitter.

While playing for the Tigers, the 35-year-old outfielder received the Golden Glove Award three times — in 2006, 2011 and 2012. Aside from the KBO, during his time with the Tigers he was also called up to the national team, where he helped Korea win gold at the 2008 Beijing Olympics and silver at the 2009 World Baseball Classic in Los Angeles.

After quite a career with the Tigers, Lee joined the Eagles in 2014. He reached his career high in terms of batting average in 2016 when he finished with a 0.352 throughout 113 games that season.

After another difficult season, Lee is not going to be the only Eagle calling it quits this season.

Infielder Kim Tae-kyun has already announced his retirement and the Eagles are expected to part ways with a lot more veterans as they have planned on going through a generation change for years now.

The Eagles had a disappointing season in 2020, finishing at the very bottom of the regular season standing with 46 wins, three ties and 95 losses. At one point this year, the club tied the all-time record for the KBO's longest losing streak, at 18. That record was originally set by the now-defunct Sammi Superstars back in 1985.