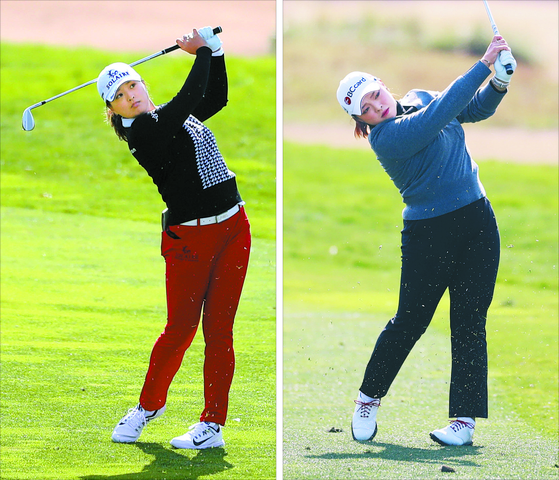 World No. 1 Ko Jin-young, left, and defending champion Jang Ha-na watch their shots during the first round of the Hana Financial Group Championship at SKY72 Golf & Resort in Incheon on Thursday. [KLPGA]


INCHEON — World No. 1 Ko Jin-young and defending champion Jang Ha-na both got off to a strong start at the Hana Financial Group Championship, taking a joint one-shot lead after the first round at SKY72 Golf & Resort in Incheon on Thursday.

As both players finished their round with birdies on the par-5 18th, they ended the first day of the tournament with a one-shot lead ahead of the field at four-under-par, 68.

When she added her first bogey of the day on the par-4 14th, the field was looking very competitive as six players were tied for the lead at three-under-par. However, Ko pulled ahead of the pack with her fifth birdie on the par-4 16th.

But her lead didn’t last long as she added another bogey on the par-3 17th. This time, seven players were tied for the lead with Ko’s group heading into the final hole.

Jang, who was also in the big leading pack, was the first to finalize her round as sole leader at four-under-par, 68. Ko quickly joined her on the par-5 18th to share the lead at four-under-par.

“I played so well in the front nine so I thought I was going to do something big,” Ko said. “I think the short break after we played the nine holes kind of ended the flow of my pace. I’m a little disappointed about that. In the second half, I went here and there by losing a shot or gaining it. But by making a birdie on the last hole, I think I finished well.”

Ko is one of many Korean golfers that normally compete on the LPGA Tour, but is playing on the KLPGA Tour due to the coronavirus. Although she’s been staying in Korea, this is only her sixth KLPGA Tour event.

As usual, Ko has been consistent in the past five tournaments she competed in as she finished runner-up in her latest tournament, at the KB Financial Group Star Championship in October.

This is the last KLPGA Tour event Ko will be competing in, as she will be heading back to the United States to compete in the LPGA Tour ahead of the U.S. Women’s Open, one of the five major tournaments on the LPGA Tour.

Unlike Ko’s dominant front-nine score, Jang didn’t have the best start as she added a bogey on the par-4 fourth. She quickly squared her score with a birdie on the par-5 fifth and by adding another on the par-5 seventh, Jang finished the front nine at one-under-par.

It wasn’t until the last three holes of Jang’s round that she started to make her way up to the top. By finishing her round with three straight birdies, from the par-4 16th, Jang quickly put herself at the top of the leaderboard with Ko.

Jang’s round included five birdies and a bogey.

“Throughout the day, I would say I played quite easily,” Jang said. “I was a little embarrassed to make a bogey that early in the round. So that made me feel tired, physically. While I was feeling tired, I had a chat with my caddie and I think I was able to finish strong. I think the strong finish set some expectations for the next three rounds. In the second half of my round, I think I just hit fairways and greens and when I hit it close to the pin, I just made a birdie, which made it easy. Since I played easily in the first round, I think I need to be a little more nervous in the next round.”


While Ko is in contention for the first time in three weeks, Jang is entering the tournament at the top of her game, as she just picked up her first win of the season at the SK Networks Seokyung Ladies Classic last week.

Choi Hye-jin, who currently leads the KLPGA Tour’s points standing, finished her first round at three-under-par. Choi isn’t seeing much luck when it comes to winning but her consistency has allowed her to top the Tour’s year ending points standing.

“I made a lot of birdies in the first nine holes,” Choi said. “But I also made a lot of mistakes so I would say it was a round where I have a lot of disappointments. Throughout the round, I think my putting was good so I was able to grab all my birdie chances at the start. But the mistakes I’ve made were not when I was in difficult situations. They were made when I was in normal situations. That allowed me to lose my score, so I think I was disappointed in that area.”

Along with Choi, four other golfers are tied for the runner-up spot.

The second round of the tournament will continue at SKY72 Golf & Resort on Friday.