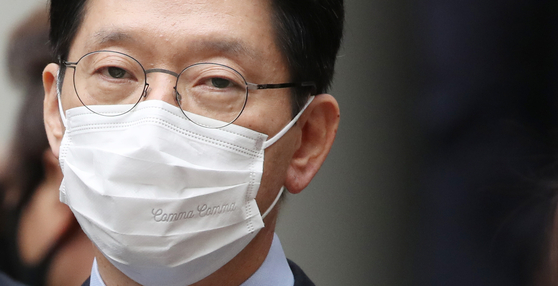 South Gyeongsang Gov. Kim Kyoung-soo leaves the Seoul High Court on Friday after he lost his appeal. Kim was convicted of conspiring with a blogger to mount an online opinion-rigging scheme during the 2017 presidential election to help President Moon Jae-in's bid. [YONHAP]


South Gyeongsang Gov. Kim Kyoung-soo on Friday lost his appeal and was sentenced to two years in prison for conspiring with a political blogger to manipulate online opinion to help President Moon Jae-in win the 2017 election.

The Seoul High Court upheld a district court’s ruling that Kim, a longtime political ally of Moon, was guilty of taking part in a major opinion-rigging operation to help Moon. The Seoul Central District Court convicted Kim in January 2019.

Kim wasn't immediately placed under detention on Friday. He's been free since being released on bail in April last year, after his initial conviction.

In 2018, Kim was indicted on charges of colluding with political blogger Kim Dong-won, better known by his online alias Druking, to mount an online campaign beginning in November 2016 to support Moon’s 2017 election bid. The blogger and his associates allegedly used a computer program to post and upvote thousands of comments on social media favorable toward Moon.

Moon won the snap election in May 2017, which came after his predecessor, Park Geun-hye, was impeached and ousted for corruption and abuse of power.

In his appeal, Kim argued that he did not know Kim Dong-won and his associates had used a computer program to mount the online campaign for Moon. The high court did not accept his argument.

“In a democratic society, a fair process to form public opinion is the most important, and he must be held accountable for manipulating this process,” the court stated in its ruling.

The court found that as a reputable politician, Kim Kyoung-soo should have not condoned any form of online opinion rigging, regardless of the methods used.

Prosecutors had argued that Kim Kyoung-soo violated the election law by promising the blogger a diplomatic post in Japan after the 2017 presidential election in return for his illicit work.

In January last year, the district court found Kim guilty of the charge, for which they sentenced him to a 10-month prison term.

“We don’t see a connection between Kim’s offering of a consul-general post in Sendai to Kim Dong-won and the local elections,” the high court said in overturning the lower court ruling.

Kim offered the post to Kim Dong-won in January 2018, but candidates for local elections had not been decided at the time.

Following the ruling, Kim said he will appeal to the Supreme Court.

“I respect the court, but I cannot accept this ruling,” Kim said.

Despite the partial acquittal and reduced prison sentence, the punishment is heavy enough for Kim to lose his governorship. Elected officials automatically lose their seats if they are sentenced to prison terms for criminal convictions.

Falling into its own trap