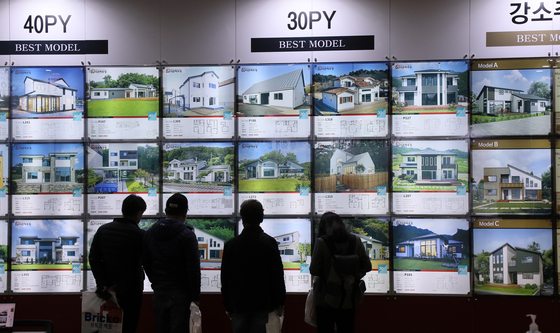 Visitors looking at pictures of stand-alone houses during an architecture exhibition held at Kintex, Goyang, Gyeonggi, on Thursday. Interest on such residential houses has been rising as apartment prices continues to go up. [YONHAP]

Prices of apartments in Seoul are on the rise even as the government and ruling party vow to raise assessed values of properties, which will significantly increase taxes paid by homeowners.

According to the latest assessment by the Korea Appraisal Board, Seoul apartment prices in the first week of this month rose 0.02 percent over the previous week.

This is double the 0.01 percent average weekly increase of the last 10 weeks.

The greater Seoul area — which includes the city of Incheon and surrounding province of Gyeonggi — has seen an even sharper spike. Apartments in Gyeonggi rose 0.23 percent compared to the previous week, much higher than the previous week’s 0.16 percent increase.

In Seoul, apartments that were relatively cheap have seen sharp rises, such as in Jung District, where last week prices rose 0.08 percent, more than double the 0.03 percent increase the previous week.

Movements in the popular, pricey neighborhoods south of the Han River were mixed.

One of the factors that drove up apartment selling prices, which have been stable for 10 weeks prior, were rising jeonse (long-term housing rental deposit) prices.

When compared to the previous week, the increase was 0.02 percentage points higher.

Jeonse prices are rising after the ruling Democratic Party passed legislation that strengthened the rights of tenants, including automatic renewal of jeonse contracts after two years as well as limiting hikes in jeonse contracts to 5 percent.

The ruling party passed the legislation in July in record time.

Since the legislations was passed, there has been a sharp decline in jeonse apartments put up for leasing.

Since the legislation was enacted, jeonse prices in Seoul rose 0.45 percent in July compared to the previous month, compared to June’s 0.24 percent increase. In August, they rose 0.65 percent and in September 0.6 percent.

Even monthly rents are on the rise as supplies of available apartments shrink.

With jeonse and monthly rent prices rising, some people have chosen to buy apartments for 900 million won ($803,000) or less. In this relatively cheap segment, government restrictions are not so onerous.

The Moon Jae-in government has put limits on loans for apartments costing 1.5 billion won or more and tightened regulations on borrowing for jeonse loans contracts. It has choked off the use of jeonse loans for actual purchases of properties.

“Usually tax hikes lead to stabilizing of [apartment] prices,” said Lee Chang-moo, a Hanyang University urban planning professor. “However, under the current situation, it’s hard to say it will have such an effect unless there is an increase in housing supplies.”

Some analysts say the government’s endless restrictions on the real estate market is only creating confusion.

“When the tax burden increases, [apartment owners] just need to sell their properties,” said Ahn Myung-sook, a senior manager at Woori Bank's real estate consulting center. “However, it seems the attitude is that they will hold on since the burden of paying taxes on real estate sales is equally high.”

Ahn said for the market to be operate normally, the government needs to lower the tax burden on people selling apartments.

The government has announced that it will cut the tax rates for apartments with assessed values of 600 million won or less to ease the tax burden on people who own relatively cheaper apartments.

These apartment owners will see their tax rate cut by 0.05 percent for three years until 2023.

However, the people that benefit from the tax rate cuts are likely to be far fewer than the government anticipate as apartment prices have risen so rapidly.

According to the Ministry of the Interior and Safety, apartments with assessed values of 600 million won or lower account for 95.5 percent of all apartments in the country.

However, these figures derive from last year’s market values.

This year, the number and proportion would be smaller.

According to KB Kookmin Bank, the medium apartment price in Seoul has already exceeded 900 million won, indicating a drop in apartments with assessed values below 600 million won.

According to the real estate information provider Budongsan 114, last month the number of apartments with market values of 900 million won or less in Seoul shrunk 14 percent year-on-year.

Apartments with market values below 900 million won in Seoul account for 54.2 percent, a drop from 62.6 percent last year.

Neighborhoods that are seeing rapid declines in such low-cost apartments include Jung District and Mapo District.

Apartments in Jung District with market values 900 million won or less have declined from 55.6 percent a year ago to 30.6 percent, while in Mapo District that figure has dropped from 49 percent to 25.4 percent during the same period.

According to tax accountant Yang Kyeong-seop, a 59-square-meter (635-square-foot) Samsung Raemian apartment in Mapo District this year was assessed at 594 million won. Considering that next year the government will apply a higher assessed value to the apartment, the owner could see the property tax increase by 70 percent.

This year the average assessed value was equivalent to 69 percent of the market value.

“The government tax cut will not have a huge impact in Seoul, where many of the apartments in Seoul are now 1 billion won or higher,” said Kim Yeon-hwa, who heads the real estate team at IBK.