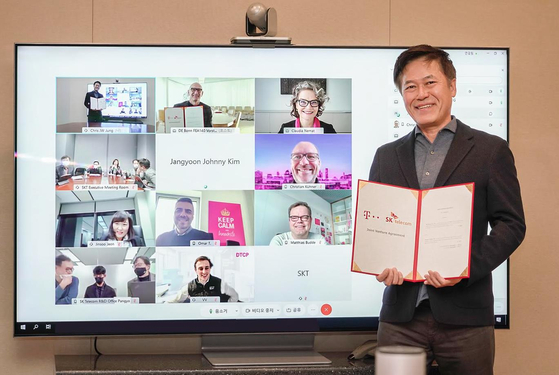 
SK Telecom and Deutsche Telekom will form a joint venture this year to develop next-generation 5G technology and expand its coverage in the European markets, the Korean company said Sunday.

Each will have an equal share of the joint venture, to be led by co-CEOs from each of the respective companies. The joint venture will be headquartered in Germany.

Deutsche Telekom has more than 240 million users on its network in 13 nations.

The company has recently expanded its business areas, after T-Mobile, a subsidiary, acquired Sprint, the fourth-largest telecommunications provider in the United States.

SK Telecom said the joint venture’s first target is 5G indoor networks in the European market. Deutsche Telekom has been testing SK Telecom’s 5G signal repeaters, or boosters, in eight cities in Germany. Based on the results, an upgraded version of the repeaters will be rolled out in Germany by the first half of next year at the earliest.

SK Telecom said it’s planning to use its German joint venture as an outpost for its expansion into international markets.
Another profit pipeline for SK Telecom is royalty fees for 100 technical assets provided by the mobile operator to the joint venture, which will be paid in proportion to the sales performance of the joint venture.

The mobile carrier has invested $30 million into funds managed by Deutsche Telekom Capital Partners (DTCP), an investment management group backed by German mobile carrier, to nurture start-ups and secure future growth engines. DTCP has opened an office in Seoul, which will function as a regional headquarters in Asia.

“This is meaningful as we were able to embark on a partnership that goes beyond borders, at a time of the pandemic,” said SK Telecom President Park Jung-ho.

“We hope the [joint venture] can become a bridge between Europe and Asia in the post-corona pandemic world. We will strive to come up with new technology and services that can add value to humanity.”