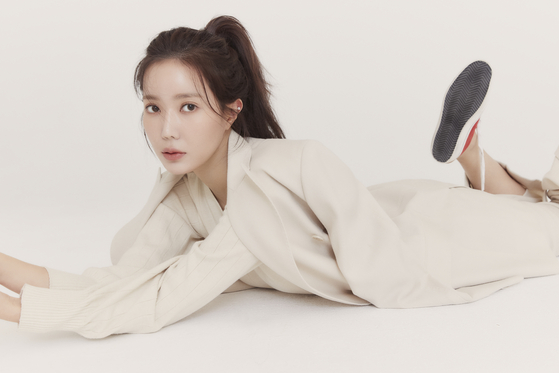 
Actor Lim Soo-hyang showed every emotion she could express in recently ended MBC drama “When I Was The Most Beautiful,” where her character had two love interests.

In the melodrama, the last episode of which scored its highest viewership at 5 percent, Lim proved her acting prowess. Many cited her performance as the reason why the audience fell for the drama.

“It is work that made me realize that now is when I’m the most beautiful,” said Lim in an interview with Ilgan Sports, an affiliate of the Korea JoongAng Daily, adding that she learned how her present self is precious, and how to love herself.

“I realized that I was looking down on what I can do at the present moment by focusing more on what had happened in the past or the anticipation of the future that I don’t even know."

She continued to share what she felt about the drama, and what her life is like currently. Below are edited excerpts.

How do the characters you play affect you personally?


It’s about whether I make my character more like myself, or make myself more like the fictional character I’m supposed to play. I think I’m inevitably influenced by the character in my normal real life. It depends on what role I play, I think I look different. The way I talk, the clothes I wear and other little things are different.

Was it difficult to act in the emotional scenes?


Many around me had asked whether it's too tough. As a matter of fact, I have never had any work that really drained me so much like this work did. I have played roles with a lot of deep history, but no others have drained me so much emotionally.

How was acting in a melodrama for the first time?


I like the '90s sentiment and the retro style, and I felt such elements from this drama. Back in the days, love stories were more passionate in dramas. I think these days we don’t show those things in dramas. I grew up watching those shows, so I like such style better.

Do you ever picture yourself getting married?

Do you think you have felt such love before?


I’m always so invested in love. And all the past memories, I paint them as something pretty as I don’t want to remember someone I dated as someone bad. If I feel that way, I feel like I’m [denying] the past version of myself and that person does not exist.

What work are you looking at now?


Most television shows are premade, so now you can basically only take on one project a year. It is quite difficult to wait such a long time to work on another project, as I like working. I’m browsing my options to meet with fans as soon as I can, but I think it’s going to take some time. Why would I waste my time not working? I really don’t like just lounging about. I have nothing else to do. If I were to take a break for a week or maybe a month, after I would call my agency and tell them that I want to work. I really do like working.


I want to do something funny and light, like a comedy. I have a desire to make others laugh. Making one laugh is a form of acting that’s really difficult to do, so I want to take on that challenge.

It seems like actor Shin Se-kyung cheers you up often. Are you close with her?


I talk to her often on the phone. She debuted early on, so she is a much more senior actor than I am. So I get a lot of tips and help from her every time I work. She listens to my troubles, sympathizes with me and even gives me advice, so I rely on her a lot. Her presence just gives me a sense of relief and power. Once we get on the phone, we talk for an hour. We sometimes spend an hour just messaging each other online. We live close by, but we don’t get to see each other in person. But, the first episode of new work we do, we always watch it.

Do you have a lot of friends you can rely on?


My friends from elementary and middle school as well as college are always there for me. I am always so thankful for them. They are the ones that hold me steady. If something happens, they always move fast. I’m moving to a new place soon, and I’m sure they will all come help. During national holidays, we get together at my place to make some jeon [Korean pancakes]. I’m so thankful that I have such friends from a long time ago who always remind me of what ideas I had from the day I started working in the entertainment business.

The chief justice must quit