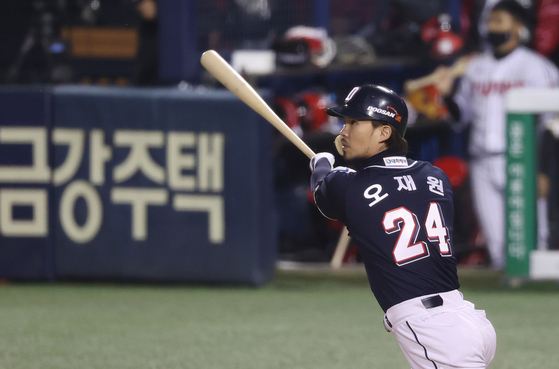 Doosan Bears veteran Oh Jae-won swings during the final game of the first round of the playoffs against the LG Twins on Nov. 5. With four RBIs, Oh was named the MVP of the series. The 35-year-old has won the Korean Series three times with the Bears. [YONHAP]


The second round of the postseason will finally kick off on Monday.

Having swept the LG Twins in the best-of-three first round last week, the Doosan Bears will take on the second-ranked KT Wiz in what on paper looks like a David vs. Goliath fight for a spot in the Korean Series.

Due to the unexpected postponement of the 2020 regular season, the postseason is being played much later this year. As a result, the first round of the postseason between the Bears and the Twins was shortened to a best-of-three series and the second round and Korean Series have been moved to Gocheok Sky Dome in western Seoul, the only domed stadium in Korea.

Under the extra cover of the Sky Dome, the second round of the postseason returns to its normal best-of-five format.

With all five games at Gocheok, the teams won’t have to worry about moving between stadiums on their off day, but they will both be competing in less familiar territory. The first two games will be played on Monday and Tuesday, starting at 6:30 p.m., with Game 3 scheduled for Thursday and Game 4 for Friday. If there is a fifth game, it will be held on Sunday, Nov. 15.

A postseason appearance from the Bears is business as usual — they've only missed it five times in the past 20 years — but for the Wiz this is completely new ground. In fact, the Suwon club's 2020 season came out of nowhere, blowing all expectations for the young club out of the water.


The Wiz joined the KBO in 2015 and spent their first three seasons hugging the bottom of the table. Things started to slowly improve with a ninth-place finish in 2018 and a jump up to sixth under manager Lee Kang-chul in 2019. 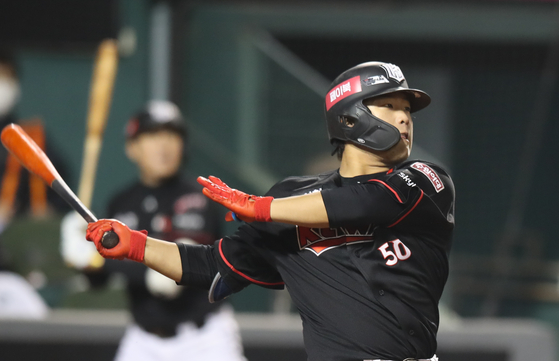 KT Wiz star Kang Baek-ho watches his hit during the final game of the season against the Hanwha Eagles on Oct. 30. Kang, the 2018 Rookie of the Year, will appear in his first KBO postseason this year. [YONHAP]


This season, they surprised everyone by finishing second. The Wiz’s second-place finish defied all expectations, especially as they started out the season very poorly, languishing at the bottom of the table. The Wiz finished out the regular season with 81 wins, one tie and 62 losses — 4.5 games behind the top-ranked Dinos.

For the Bears, the biggest surprise was that they only finished in third place, an unusual spot for the defending champion. The Bears won the regular season in both 2018 and 2019, earning a direct bye to the Korean Series. They finished runner-up in 2017 and still advanced to the Korean Series, losing to the Kia Tigers.

So despite finishing beneath them in the regular season standing, the Bears are very much the Goliath to the Wiz's David. They are perennial postseason warriors and are fielding a squad that has won the Korean Series three times in five years, and barely lost any players along the way.

Back in 2015, when the Wiz had just crashed out of their first season in the KBO, the Bears finished third and then swept through the postseason to steal the Korean Series title. They'll be hoping to do it again this year, and the stakes are even higher. With a huge number of Bears players up for free agency this winter — huge names from that championship team including the entire infield — this could end up being one last hurrah for that dominant Doosan lineup.

But despite the history, there's no reason to think the Bears have the edge over the Wiz this year. While Doosan brings the playoff experience, KT has the numbers in their favor. Looking at the two team's head-to-head record this season, the Wiz are up with nine wins and seven losses.

Still, the Bears know what it's like to play in the postseason, where long-term strategizing and established pitching rotations take a backseat to quick decisions and flashes of brilliance. Ultimately, the series will come down to whether the Wiz's recent dominance trumps the Bears' tried and tested technique.


In Game 1 of the series, the Bears will once again start things off with Chris Flexen on the mound. Back in the first round of the postseason, Doosan saw some success with Flexen in Game 1, where he tossed six scoreless innings, giving up four hits and a walk while striking out 11. Thanks to Flexen, the Bears started out the series with a 4-0 victory over the Twins.

While the Bears are sticking with what works, Wiz manager Lee made an interesting choice with his starter in Game 1. Rookie So Hyeong-jun will start things off, becoming the first ever postseason starter in the club's history.

Looking at his regular season performance, the decision to call up a rookie isn't too surprising. Having started in 26 games throughout the 2020 season, So picked up 13 wins and six losses with a 3.86 ERA.

The winner of this series will advance to the Korean Series and play in a best-of-seven against the NC Dinos. Once again, all Korean Series games will be played at Gocheok Sky Dome.