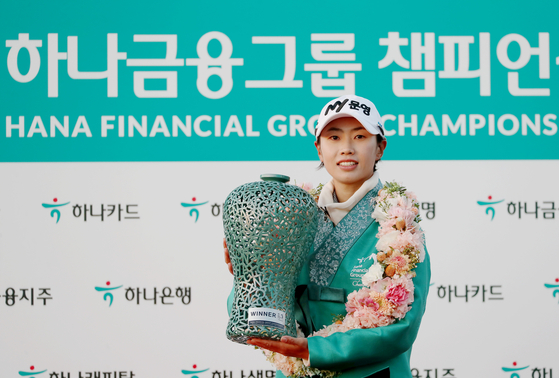 An Na-rin poses for a photo with a trophy after winning the Hana Financial Group Championship at SKY72 Golf & Resort's Ocean Course, in Incheon on Sunday. [YONHAP]


INCHEON — An Na-rin fought through strong winds and cold weather to pick up her second win of the season at the Hana Financial Group Championship at SKY72 Golf & Resort in Incheon on Sunday.

Shooting one-under-par, 71, on the final round, An finished the tournament three shots ahead of runner-up Jang Ha-na.

Starting the final round tied for the lead with Park Min-ji and Jang, An got off to a strong start by adding her first birdie of the day on the par-4 second to surge up to the top of the leaderboard. With another birdie on the par-4 ninth, An extended her lead.

Following those two birdies in the front nine, An consistently maintained her score with a series of pars in strong winds and cold temperatures on the course. Although she added her first bogey of the day on the par-3 17th, that didn’t put her any further away from the trophy. Instead, after that hole, An’s lead was extended to three shots, once again ahead of Jang.

By finishing the final hole with a par, An managed to secure her victory at eight-under-par, 280.

“A month ago, I picked up my first-ever win,” An said. “I’m very happy to pick up my second win this quickly. I’ll work even harder.”

With the win, her second of the season, An took home the prize money of 300 million won ($267,000). An also moved up to eighth on the KLPGA Tour’s Player of the Year points standing at 215 points. In terms of the 2020 money ranking, An jumped up to second.

Having joined the KLPGA Tour in 2017, it took An until her fourth year and 93rd tournament to pick up her first-ever win on the KLPGA Tour at the Autech Carrier Championship with Sejong Field Golf Club in October, but just a month later she's already on number two.

In that first win, An headed into the final round with a 10-shot lead but seemed shaky on the final day as she lost that big lead and finished four shots ahead of the runner-up. On Sunday, none of those nerves were visible in her performance, despite heading into the final round in a three-way tie.

“At the Autech Carrier Championship, I didn’t have any experience so I got really nervous,” An said. “Of course I was nervous today, but I tried to keep my score and focus on playing my own game. And I think that worked out well.”

In terms of her performance in the wind, An pointed out that recent tournaments on the KLPGA Tour have all been played in windy conditions.

Considering 2020 is her first season winning a tournament, it’ll be an unforgettable one for An as she also became one of only three multi-winners in this delayed season.

Despite the low scores on the first round, where Jang and world No. 1 Ko Jin-young were tied for the lead at four-under-par, 68, An ended up being the only player to shoot under-par rounds on all four days.

For the final difficult day, An is only one of three players to shoot an under-par round. An’s round of one-under-par even tied for the lowest score on Sunday.

Although Jang failed to defend her title, she managed to continue her strong end to the season by finishing runner-up, with a four-round total of five-under-par, 283.

World No. 1 Ko finished tied for eighth with a four-round score of even par, 288.

Choi Hye-jin, the leader on the KLPGA Tour’s Player of the Year points standing, finished tied for 17th with a four-round total of five-over-par, 293.

For Choi to be guaranteed the award, Kim Hyo-joo needed to finish 11th or worse on Sunday. Incredibly, Kim finished tied for 11th with a four-round total of two-over-par, 290.

KLPGA Tour veteran Heo Yoon-kyung also had an unforgettable tournament as this was her very last event before retiring.

Heo finished the tournament at 10th, with a four-round total at one-over-par, 289. Playing her 10th season on the KLPGA Tour, Heo won a total of three tournaments throughout her career. Heo’s retirement tournament was a meaningful one as Hana Financial Group is her sponsor.

In the 2020 edition of the Hana Financial Group Championship, a total of 96 players entered the tournament for the title, playing from a total of 6,474 yards at SKY72 Golf & Resort's Ocean Course. After the first two rounds, the field was reduced to the top 60, or players tied at 60th.

The KLPGA Tour now has one more tournament remaining this season, the ADT CAPS Championship 2020. It’ll be a 54-hole event held at La Vie est Belle Country Club in Chuncheon, from Nov. 13 to 15.

Hana Financial to jointly invest in properties with Tishman Speyer