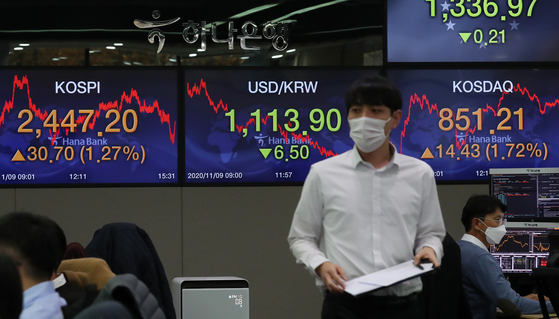 A screen shows the closing figure for the Kospi in a trading room in Hana Bank in Jung District, central Seoul, on Monday. [NEWS1]

Seoul stocks extended their winning streak to a sixth day to hit the highest point in more than two years on Monday as investor appetite for risky assets increased following Joe Biden's victory in the U.S. presidential election. The won surged to a 22-month high against the dollar.

The president-elect has supported large-scale fiscal spending and stimulus policies that would weaken the dollar.

The local currency closed at 1,113.9 won per dollar, down 6.5 won from the previous session's close.