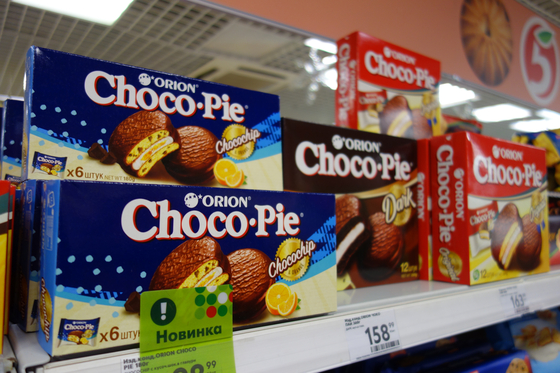 Orion's Choco Pies on sale in a supermarket in Russia. [JOONGANG PHOTO]

The company announced Monday that its net profit came to 77 billion won ($69.1 million) between July and September, up 10.5 percent from a year ago.

Its operating profit also rose 6 percent on year to 107.8 billion won while it saw 597.4 billion won in sales in the third quarter of the year, a 12.7 percent jump compared to same period a year earlier.

Amid the prolonged coronavirus pandemic, the company said the upbeat result was largely led by a strong performance overseas, particularly in China, Vietnam and Russia.

Sales in China increased by 14.4 percent on year in the third quarter and operating profit by 1.6 percent.

Choco Pie was especially popular in the Chinese market. With the newly launched Strawberry-flavored Choco Pie and extra-chewy Chal Choco Pie, sales of all Choco Pie in the third quarter increased by 43 percent on year. Another category that helped boost sales was jelly candy My Gummy — it saw a 31 percent soar on year.

Orion said it plans to strengthen marketing strategies to promote its snacks in the fourth quarter to target consumers who enjoy eating different things in the winter.

In the Russian market, Choco Pies and crackers sold well, contributing to a 16.1 percent increase in sales and a 46.2 percent rise in operating profit. Its various Choco Pie products, including raspberry, cherry, blackcurrant and mango, continued to be popular in the third quarter, posting an 18 percent increase on-year.

Orion said it plans to release additional Choco Pie flavors and add more crackers to its lineup in Russia in the fourth quarter.

"As a result of our efficiency-focused and profit-oriented management in the third quarter of the year, we were able to perform well in both sales and operating profit," Orion said in a Monday statement. “We will try harder to not only continue the growth by coming up with new products, but also to successfully make the leap as a global food and health care company by pushing hard our three new business in the meal replacement, drink and biopharmaceutical sectors.”