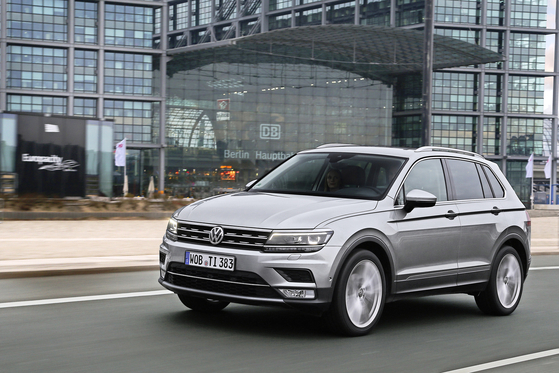 Volkswagen’s Tiguan 2.0 TDI offers style and utility and is currently available with a range of promotional services. [VOLKSWAGEN]

According to the Korea Automobile Importers & Distributors Association’s (Kaida) analysis of imported car sales, 7,077 Volkswagen Tiguan 2.0 TDI vehicles have been sold this year as of October, second only to the Mercedes-Benz E 300 4MATIC, with 7,794 units.

The top of the import car sales ranking is usually the territory of high-end sedans with price tags around 50 million won ($44,000) for the past three years. For the Tiguan to clinch the No. 2 spot — not to mention No. 1 for imported SUVs — despite being available for as little as 36 million won is clearly an impressive achievement.

The Tiguan has also now passed the 60,000-unit milestone, becoming the first imported SUV ever to hit that sales record. Considering these high sales, it’s not especially surprising that the Tiguan has received Kaida’s bestseller monthly award 22 times since its release in 2008.

The Tiguan received further recognition this year, picked by customers as the best imported SUV of the year in October.

Volkswagen ascribes the Tiguan’s success to the diversification of the product line, offering four different trims that cover numerous lifestyles. Ranging from a front-wheel version to a seven-seater, the Tiguan has plenty to offer a variety of customers.

Volkswagen aims to capitalize on this success by offering generous promotions to its customers.

In other words, the Tiguan can be bought for as little as 36 million won in total.

Buyers who wish to purchase with cash will be eligible for a further 12 percent reduction as well.

This promotion will end when either the planned 450 units are sold, or by the end of this year. Every customer who purchases Volkswagen automobiles within this promotion period will receive the newcomer welcoming service, which provides a 30 percent discount on vehicle inspection, auto fluids check and first official service from Volkswagen within the first six months of the purchase warranty.