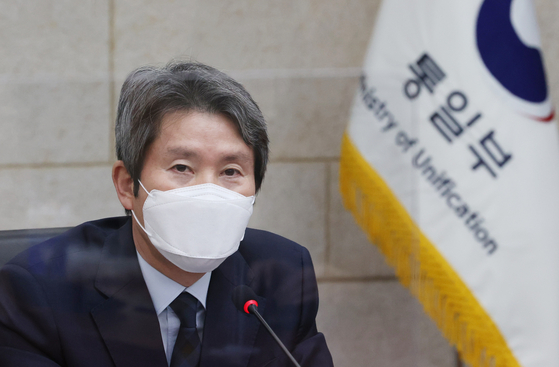 
The transition of power between presidential administrations of the United States presents an opportunity for the Koreas to restore ties and build trust, Seoul’s minister of unification said Monday.

During his first official press conference, Minister Lee In-young said the election of Joe Biden as the next president of the United States was a “major turning point” for the situation on the Korean Peninsula. But he noted it would take significant time for the new administration in Washington to organize a coherent diplomatic policy toward North Korea.

“With this there is a concern that the situation in Northeast Asia may be uncertain and unclear,” Lee said. “On the other hand, however, I believe this time opens up a more opportune space to achieve inter-Korean peace.”

South Korea will closely coordinate with the incoming administration through multiple diplomatic channels to foster a united approach to the Korean Peninsula peace process, Lee said, while also urging North Korea to “act wisely and flexibly” during this period of transition.

“Historically the U.S. government has closely listened to the voice of its ally, the South Korean government, and the character of U.S. policy toward North Korea has therefore been affected by [Seoul’s position],” the minister said, adding he hoped Biden would become a “good friend to our nation as a 'bringer of peace.'“

Pyongyang has not yet issued any response to Biden’s victory in last week’s U.S. presidential election, the results of which incumbent President Donald Trump has refused to accept, alleging fraud.

North Korea is believed to have preferred Trump to remain in office, given Biden’s harsh rhetoric toward the regime and condemnation of Trump’s handling of negotiations with Pyongyang.

In Seoul, concerns remain that Biden’s policy toward the North would closely resemble that of Barack Obama’s so-called “strategic patience” approach, which entailed waiting for the regime to return to talks amid continued economic sanctions.

A senior Unification Ministry official also told reporters on Monday he did not expect a Biden administration to act like Obama’s, given major differences in the situation, like the advancements in Pyongyang’s nuclear program and the effects of sanctions on the isolated regime.

“Biden was a strong supporter of former [South Korean] President Kim Dae-jung’s Sunshine Policy,” the official said, noting Biden’s policy could be closer to that under Bill Clinton, who engaged in more proactive talks with the regime.

“What is especially important is how strongly we build a consensus with the United States on the Korean Peninsula peace process and the extent to which we open talks and exchanges between the Koreas,” the official added.

The official also appeared to revive the notion of Seoul acting as an intermediary between Washington and Pyongyang — a role that South Korean President Moon Jae-in attempted to play in earlier parts of the negotiating process following his first summit with North Korean leader Kim Jong-un in April 2018.

Moon was successful in getting the North and the United States into direct talks between its leaders — aided in no small part by Trump’s preoccupation with the optics of such an unprecedented event — but his position increasingly narrowed as the two countries began negotiations over the details of Pyongyang’s denuclearization process.

Those talks eventually collapsed at Trump and Kim’s second summit in Hanoi and failed to recover in the months following. The North then lashed out at South Korea for relaying misleading ideas about American intentions, cutting ties and blowing up a key liaison office between the two.

The U.S. election came at a time when Pyongyang, preoccupied with its economic struggles, was biding its time while continuing to build up its strategic weapons program, most recently displayed in the form of an enormous intercontinental ballistic missile during a military parade last month.

As to how the Biden administration will engage the North — or whether it will prefer a bottom-up approach prioritizing working-level talks over Trump’s preferred top-down policy — the official noted a bottom-up approach would give Seoul a greater voice in the negotiations.

“This way we can more closely link the process to our approach, which is reaching a comprehensive agreement, but undertaking enforcement gradually,” the official said.