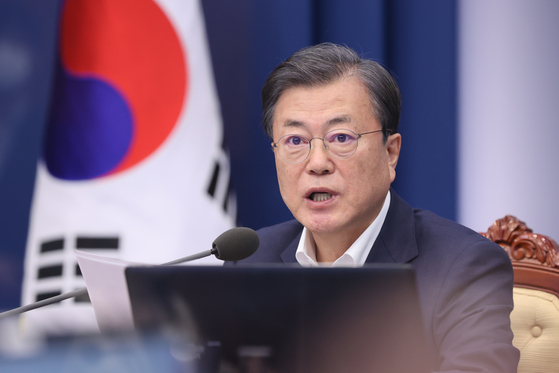 President Moon Jae-in speaks during the senior secretaries' meeting at the Blue House on Monday. [YONHAP]


President Moon Jae-in on Monday vowed to work with the incoming U.S. administration to maintain his North Korea policy, while members of his party expressed hope that U.S. President-elect Joe Biden would continue his predecessor's engagement with Pyongyang.

“As a friend and ally, the Korean government will absolutely respect and support the American people’s choice,” Moon said.

Moon added he will work with the incoming Biden administration to uphold progress made by his predecessor, Donald Trump, toward North Korea’s denuclearization and establishing peace on the Korean Peninsula.

“I will especially make sure that there will be no vacuum in efforts to strengthen the Korea-U.S. alliance and to move the Korean Peninsula Peace Process forward,” Moon said. “I will do my best that the precious accomplishment achieved with the Trump administration will be succeeded by the next [U.S.] administration and developed further.”

Since he took office in 2017, Moon has promoted his “Korean Peninsula Peace Process ” policy toward the North, aimed at achieving complete denuclearization and establishing a permanent peace regime on the peninsula. Starting with North Korea’s participation in the 2018 PyeongChang Winter Olympic Games, three inter-Korean summits took place between Moon and North Korean leader Kim Jong-un.

Moon also worked hard to mediate talks between the North and the U.S., and Trump held the first-ever U.S.-North summit with Kim in June 2018, followed by the second summit in February 2019. The second meeting, however, ended with no deal, largely stalling Moon’s initiative.

“We will have multifarious communications with President-elect Biden and key aides who are preparing the new administration,” Moon said. “Our government has a firm intention to steadily push forward the Korean Peninsula Peace Process.

Moon also stressed that he will work with the incoming U.S. administration to solidify the bilateral alliance, adding that the two countries share key values such as democracy, peace, human rights and multilateral cooperation. He also stressed the importance of economic cooperation and expressed support for Biden’s ambitious climate change plans such as making America carbon neutral by 2050.

The ruling Democratic Party (DP) has also stressed the importance of the incoming U.S. administration continuing engagement policy toward the North.

In an interview with MBC on Monday, Rep. Song Young-gil of the DP, chairman of the National Assembly’s Foreign and Unification Committee, made clear that it is undesirable for Biden to continue President Barack Obama’s “strategic patience.”

The North fired a missile in April 2009, shortly after Obama took office, and continued a series of provocations, including a second nuclear test, that continued through the following month. The Obama administration made clear that it would not negotiate with the North unless it gives up its nuclear and missile programs.

Under the Obama administration's “strategic patience” policy, the North was completely isolated for eight years, yet continued to bolster its nuclear and missile capabilities.

“During the period of strategic patience in the past, Korea had the Lee Myung-bak and Park Geun-hye administrations, but now we have the Moon administration,” Song said. “The Korean people strongly demand the peaceful resolution of the North Korean nuclear issue. I believe the incoming administration can continue the Clinton administration’s engagement policy toward the North.”

The DP also said it will send a delegation to the United States from Nov. 16 to 21 to meet with Biden's foreign affairs and security aides.