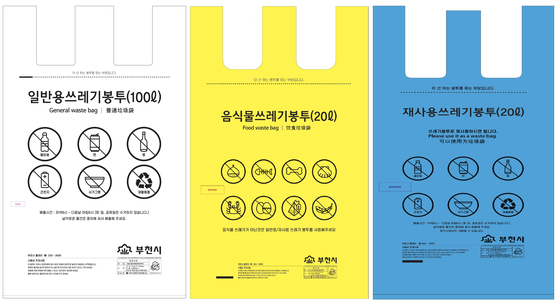 Trash bags in Bucheon, Gyeonggi, that have Chinese and English descriptions on them. [GYEONGGI PROVINCIAL GOVERNMENT]

The Gyeonggi Provincial Government rolled out plans Monday to encourage every city in the province to include common foreign languages — like Chinese and English — on their authorized garbage bags to improve recycling.

Gyeonggi, which surrounds the capital of Seoul, is known to have the largest foreign-born population out of all provinces and metropolitan cities in Korea. Some 720,000 people, or 32.5 percent of all foreigners living in Korea, reside in Gyeonggi, the provincial government said.

Currently eight cities in Gyeonggi have some form of foreign language instructions on their garbage bags, the provincial government said Monday in a statement — Suwon, Bucheon, Hwaseong, Ansan, Pyeongtaek, Gwangmyeong, Gunpo and Dongducheon.

As the number of foreign residents continues to rise, Gyeonggi said it created guidelines on how cities and counties can redesign their trash bags to include English and Chinese instructions, and started distributing them to 31 cities and counties in the province since last September. Gyeonggi said it was also showing some good designs currently used by one of the eight cities for reference.

Trash bags in Korea are controlled by each city and county government office. Recyclables and food waste aren’t supposed to go into so-called general waste bags, but officials believe a lack of foreign language instructions have made it difficult for foreigners to follow the rules.

Some cities were said to be preparing trash bags with foreign languages other than English or Chinese.

Suwon, for instance, recently made a trash bag with Vietnamese instructions as its Vietnamese enclave grew, Gyeonggi said. Anseong has decided to design trash bags in Russian for a similar reason.

Im Yang-seon, head of resource recirculation at the Gyeonggi Provincial Government’s Environment Bureau, vowed to cooperate with each city and county government office to guide foreigners to better recycling.

'Tis the season for the Starbucks diary giveaway event