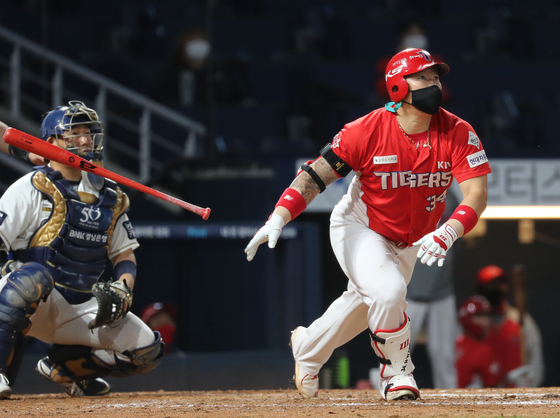 Choi Hyoung-woo of the Kia Tigers, in red, watches his three-run home run during a game against the NC Dinos at Changwon NC Park on Oct. 15. [YONHAP]


The Kia Tigers may have finished just short of advancing to the postseason but veteran Choi Hyoung-woo still ended his 2020 season on a high note.

In the postponed 2020 KBO season, the Kia Tigers just missed out on a playoff spot after finishing sixth, with a record of 73 wins, a tie and 71 losses. Although sixth place is just one shy of earning the wildcard spot, they fell out of contention pretty early in the season as the Tigers were 7.5 points behind the fifth-ranked the Kiwoom Heroes.

While Choi finished his 2020 season strong in general, his statistics in the month of October stand out. In 26 games, Choi had a .400 batting average with 10 home runs and 32 RBIs for the month. This allowed the 36-year-old to top the league in monthly batting average, home runs and RBIs.

Thanks to his outstanding performance in October, Choi ended up topping the league’s batting average for the season, at .354.

Choi sat out the Tigers’ last game against the NC Dinos on Oct. 31, prompting speculation that he didn't want to risk that batting title, but Choi shrug off the rumors.

He became only the fifth player to win three major batting titles.

Choi has played in the KBO for 15 seasons, as well as two seasons in the Futures League with the Police Baseball Team to fulfill his military duty. Including his RBIs in the 2020 season, Choi had a career of 1,335 RBIs, good enough to rank fourth.

With his consistent performance throughout his career, Choi became the very first free agent in the KBO to break the 10-billion-won ($8.98 million) mark, signing his four-year free agent contract at 10 billion won with the Tigers ahead of the 2017 season.

With the end of the 2020 season, Choi should earn his second free agent status. Although it's uncertain as to where he'll be heading, the old slugger is still working hard in preparation for the upcoming season.

Below are edited excerpts of an interview with Choi.

Q. What is the secret behind your batting success in October?

A. I didn’t change anything special. After I returned from a successful spring training this year, I injured my ankle. It was so bad that I had to take a month off, but the postponement of the season from the coronavirus pandemic gave me some time to recover.

Since my cycle also got postponed [due to injury] at the start of the regular season [May 5] it wasn’t bad. It was hard to make the adjustments in the beginning but it slowly got better.

A. The end of this year’s regular season was the time when we would normally play the playoffs or the Korean Series. I think the end of October was normally cold, but this year, it wasn’t as cold. I guess I was in a good condition [physically].


Q. In the month of September, you made headlines for playing in games while wearing a mask. What made you wear the masks even on the field?

A. It was around the time when the social distancing level went up to the second level. As a part of society, I was thinking about getting involved too. Baseball is important, but the safety of my family is more important. I can’t test positive for the virus and put my teammates and family in danger, and wearing a mask didn’t actually affect my batting at all.


Q. In September, when you wore masks, you played well by finishing the month with a .381 batting average with six home runs. Once the season headed into October, you took off your mask. Why did you do that?

A. Since the social distancing level went down to Level 1, I just went along with that. It was the time when the KBO re-opened its gates and started letting fans back in. People around me said that I may feel unstable if I start playing badly without wearing a mask because I played well wearing one, but I don’t really care about that. I just try my best and if it doesn’t work, it doesn’t work.


Q. There was a lot of talk about you not playing in the Tigers’ very last game of the season against the NC Dinos on Oct. 31. What happened before that game?

A. Ahead of that game, I had a talk with manager Matt Williams. He told me that he was going to take out all the starting players and create a lineup of young players. So naturally, I was excluded as well. Since the rankings were all finalized and we only had one more game remaining, it didn't really matter. It would have been different if we were competing for the title on that day, but since we weren't there was no reason for me to be out there.


Q. There were rumors that you missed that last game to ensure you won the batting title because you were already ranked first in the KBO batting average standing. How did you feel about that criticism?

A. Just like I said earlier, I didn’t do that intentionally. If people want to think that’s why I missed the last game, then I can’t change their thoughts.


Q. It looks like you’re in great condition all the time. Is there any secret behind your form?

A. Not really. I eat and sleep well like everybody else. But the important thing is that I don’t carry over what happened today to the next day. If I play a game where I had no hits in four at-bats, I get stressed. But there’s nothing I can do about it. So I need to shake it off and prepare for the next game.

I think I’m better at that than other players. There are younger players who throw their helmets in the dugout when they fail to make a hit. Whenever there’s a chance, I always tell them that they just need to play better next time.


Q. Four years ago, before you signed your free agent contract with the Tigers, you emphasized the importance of staying healthy. How do you feel about that now?

A. I think that’s still something I want to appeal [to other clubs]. Since 2013, I’ve managed to keep my batting average above .300. Except for the 2019 season, that was accomplished by making 150 hits or more every year. I think the biggest strength I have is consistency and my ability to stay healthy.


Q. What is the secret behind that consistency?

A. I would say my habits haven't changed since I was little. I experienced getting released [by the Samsung Lions in 2005], and since then I have had this awareness inside me that my spot could disappear at any time. As long as my bones aren’t broken, I keep on playing because at the back of my mind I'm thinking I have to keep my spot. So I found a way to overcome injuries up to a certain pain threshold.


Q. It looks like you’ve been technically consistent with your swing, too. How do you take care of that?

A. I don’t change much in my swing, but in terms of weight shift in my lower body, I use two different techniques.

That ways, I get to minimize the weight shift so I can increase accuracy. And once I recover from my slump, I go back to the leg kick swing to add power to my swing.


Q. How did you end up with two different swing forms?

A. When I played for Samsung, our veteran player Yang Joon-hyuk told me that I can’t play a full season with just one swing. He told me that I need a manual option just in case I get in a slump. So it was based on that.


Q. What is the secret behind your repeated success in home runs, RBIs and batting titles?

A. There’s nothing special. Rather than looking for home runs, I just try to hit the ball. Then, I tend to enjoy the situation when I’m at bat with an opportunity to score. Since I was moved to the middle of the batting lineup, I figured out how to add runs.


Q. This winter, you’ll earn your second free agent status. How do you feel?


A. Nothing has been decided yet. Other teams are still in the postseason, but next year, I will be playing my 20th season as a pro. When I joined Samsung in 2002, I never thought that I’d still be playing baseball now. I’ve already put aside my own ambition.


Q. What is your goal for your remaining time as a pro?

A. I’ve said this countless times, but my goal is to become a player who can help his team. I’ve said it too many times that it might be embarrassing for those listeners who’ve been hearing about this all the time, but as I stack up my career, I have one ambition, which is to set a new record in career RBIs.