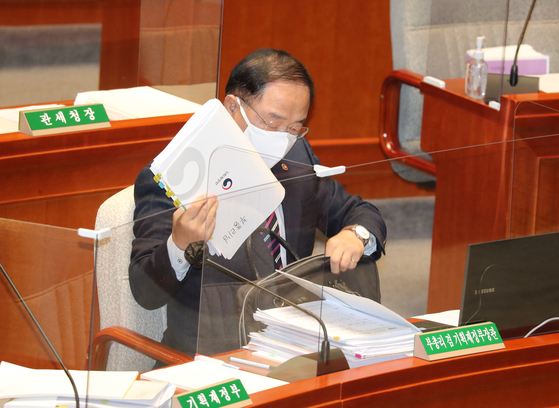 
The government accumulated total debt of 800 trillion won ($715 billion), boosted this year by aggressive spending to battle the economic downturn caused by the coronavirus pandemic.

Lawmakers are currently reviewing proposals for next year’s budget, which promises to be a record size — and add to the total debt.

According to the Finance Ministry Tuesday, the nation’s debt at the end of September totaled 800.3 trillion won, 105.9 trillion won or 15 percent more than a year earlier.

The total rose 6.2 trillion won or 0.8 percent compared to the previous month largely due to the nation’s fourth supplementary budget in a single year, which was approved in September.

The entire fourth supplementary budget was financed through treasury bonds.

The government estimates the total national debt will reach a record 846.9 trillion won by the end of the year, a 21 percent increase year-on-year.

As government spending has expanded aggressively to combat the pandemic and other weaknesses in the economy, tax collections have been shrinking.

Spending in the first nine months grew 12.6 percent or by 48.8 trillion won compared to the same period last year. Between January and September the government spent a total of 434.8 trillion won.

In September alone, the government spent 46.1 trillion won, which was 9 trillion won or 24 percent more than a year earlier.

Government revenues in the first nine months of this year came to 354.4 trillion won, 5.1 trillion won or 1.4 percent less than a year ago.

The government collected 214.7 trillion won in taxes, which was 13.4 trillion won, nearly 6 percent less, than a year ago.

The biggest decline came in corporate taxes, which shrunk 15.8 trillion won, or 24 percent, to 50 trillion won as businesses struggled with the pandemic.

Value-added taxes, which are an indicator of small business health, shrunk 4.3 trillion won or 8 percent to 47.7 trillion won.

In September, the government saw a slight increase in taxes, largely thanks to income taxes. But corporate taxes in September continued to shrink.

When including what are known in Korea as the four social insurances — the national pension fund, health insurance, employment insurance and work-related injury insurance — the deficit grew to 108.4 trillion won, nearly double the 57 trillion won deficit recorded during the first nine months of last year.

The government estimates that by the end of this year, the deficit including the four social insurances will amount to 118.6 trillion won, a 99 percent increase over 2019.

With the fourth supplementary budget, the government estimated the nation’s debt-to-GDP ratio would rise to 43.9 percent, a record high and above the 40 percent threshold respected by past governments.

With next year’s budget proposed at a record-busting 555 trillion won, which includes financing by government treasuries, the debt is expected to rise to 945 trillion won by the end of 2021.

The debt-to-GDP ratio is expected to rise to 46.7 percent.

This represents a rapid increase in debt. In the first year of the Moon Jae-in government, the national debt was at 660.2 trillion won.

“[The 47 percent debt-to-GDP ratio] is a level we can easily handle,” said Finance Minister Hong Nam-ki at the National Assembly on Tuesday.

“Due to the four supplementary budgets, our national debt ratio this year will be raised to 44 percent and next year it will go up to 47 percent,” Hong said. “[But] even advanced countries have expanded their fiscal spending [to combat the pandemic] more aggressively with higher debt ratios than ours.”