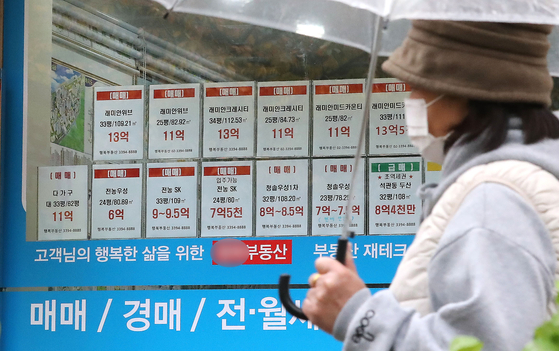 Postings on the window of a real estate agency in Seoul on Nov. 1 demonstrate the shortage of jeonse offerings in the local real estate market. [NEWS1]


As real estate regulations have made it increasingly difficult for people to live in apartments by paying jeonse long-term deposits, monthly rent in Seoul is on the rise.

In Gangnam District, southern Seoul, a few places are renting in the 2-million-won ($1,800) to 3-million-won range, which is around the average monthly pay of an office worker.

KB Kookmin Bank’s real estate information team Liiv On recently published October’s real estate trends. According to the statistics for apartments that are 95.9 square meters (1,032 square feet) or smaller, the monthly rent index for October 2020 was 101.6, with January 2019 at 100. October’s data was the highest since the relevant statistics were first compiled in 2016 January. 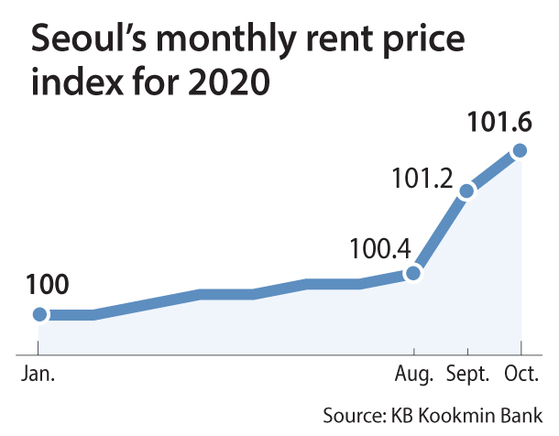 “[The Dogok Rexle] is an apartment complex with 3,000 units, but there are no jeonse vacancies, and there are only two to three offerings for monthly rent,” said a real estate agent near Dogok Rexle. “Homeowners have been lowering the rental deposit and raising the monthly rent when they are putting their apartments out in the market.”

The decrease in the quantity of monthly rent apartment deals spurs the increase in prices. According to Asil, a local real estate information provider, there were 11,342 apartments for monthly rent in Seoul’s real estate market as of Nov. 8. The quantity is around half of what it used to be right before the implementation of the tenant protection legislation that passed the National Assembly at the end of July, when there were 23,525.

The situation does not get better even after combining with the number of jeonse deals in the market. As of Nov. 8, there were a total of 23,595 offerings of jeonse and monthly rent combined. The number is less than 40 percent of the volume at the end of July. As one of the laws allows tenants to automatically extend the two-year jeonse contract for another two years, it has been increasingly difficult for new tenants to acquire jeonse apartments.

The fact that there is no concrete solution for the government to improve the inadequate supply of jeonse deals is also intensifying anxiety for those searching for homes. The government is currently examining a measure that would add more public rental housing units and introduce new tax credit benefits for monthly rents during the year-end tax adjustment.

Finance Minister Hong Nam-ki has suggested there is no clear-cut solution to the real estate quagmire.

“If there are exceptional [jeonse] solutions, the government would have acted upon them,” said Hong on Nov. 6 at a meeting of the Strategy and Finance Committee.

“It is difficult to improve the jeonse situation without increasing the quantity of private housings,” said Lee Chang-moo, an urban planning and engineering professor at Hanyang University. “There is now a bigger possibility that the homeowner will transfer the increased tax to the tenant.”

“Even if there is a solution right now, there needs to be more time for more apartments to be supplied in the market,” said Kim Yeon-hwa, who heads the real estate team at IBK. “It is difficult for the spike in jeonse and monthly rent prices to stabilize in the short term.”