Hyundai Motor to add Nvidia in-vehicle system to all cars

Hyundai Motor to add Nvidia in-vehicle system to all cars 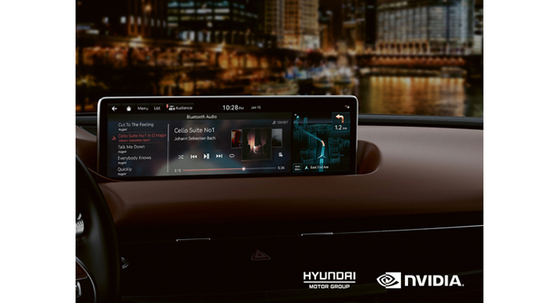 A rendered image shows an in-vehicle system created to mark the collaboration between Hyundai Motor and Nvidia. [Hyundai Motor]


Hyundai Motor will use Nvidia's in-vehicle information and entertainment system in all of its Hyundai, Kia and Genesis models from 2022, a significant step toward its vision of a “connected car.”

The Korean automaker and U.S. chipmaker announced on Tuesday that Hyundai’s new fleet will be packed with a system called Nvidia Drive, which is already installed in Genesis G80 and GV80 models.

The adoption of the Nvidia system could allow for the centralization of the computer architecture in the car, making it easier to upgrade software features for automated and autonomous vehicles.

Nvidia also signed a partnership with Mercedes Benz earlier this year to apply its software to the German automaker’s cars.

“Nvidia brought consumer electronic functionality and a graphics-rich user interface to infotainment systems more than a decade ago,” said Ali Kani, vice president of autonomous vehicles at Nvidia. “Now, we are once again transforming these systems through the power of AI, helping Hyundai Motor Group increase safety and value, along with enhancing customer satisfaction, throughout the lifetime of the vehicle.”

Hyundai has high expectations for the new system.

“The Nvidia Drive platform is proven — it is scalable, energy-efficient and has the performance to support our next generation of software-defined vehicles.”

The move is aligned with the previous pledge made ahead of the 2019 Consumer Electronics Show (CES), where it vowed to have all of its cars connected to the internet by 2022.

At CES, the company introduced a vehicle with wheels attached to robotic legs with a wide range of motion. Hyundai’s concept of a truly connected car is a car smarter than a computer that can share information not only with other vehicles on the road but also with homes and surrounding infrastructure.