Just a few days after parting ways with the Hanwha Eagles, outfielder Lee Yong-kyu has already found a new club.

The Kiwoom Heroes announced that they have signed the former Eagles captain on Tuesday. The two agreed to a one-year contract at 150 million won ($134,000), which includes an annual salary of 100 million won and an option of 50 million won. 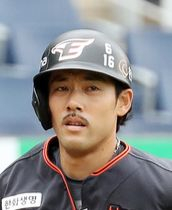 
“I was thankful to general manager Kim Chi-hyun for contacting me first,” Lee was quoted as saying. “I’ll work hard to live up to the team’s expectations.”

On Nov. 5, the Eagles made the surprise announcement that they decided to release Lee, who was the team’s captain until just a few days earlier, as the 35-year-old veteran didn’t seem to fit into the club’s future plans. Due to this, the Eagles decided to decline the one-year option now that Lee’s two-year contract is up.

The last few years have been tumultuous for Lee. Shortly after signing that two-year contract he asked the club to release him for a trade ahead of the 2019 season. When they refused, Lee went public with the story that his trade request was being blocked. In response, the Eagles benched him for the entire season.

A year later, the apparently redeemed Lee returned to the Eagles roster as captain, but just one season later he was released.

Considering those difficult few years, Lee looked like a likely candidate for retirement when the Eagles dropped him last week. Less than a week later, Lee is back for at least another year in the KBO.

“I think the Heroes are a team with great players,” Lee said. “I’ll put all my passion into [the club] so I can help it reach the highest point.”

Having made his KBO debut with the LG Twins in 2004, Lee also played for the Kia Tigers before joining the Eagles.

Although the Eagles finished the 2020 season in a disappointing last place with a record of 46 wins, three ties and 95 losses, Lee still fulfilled his role as captain.

Appearing in 120 games throughout the season, Lee finished with a .286 batting average with 17 stolen bases, 32 RBIs and 60 runs.

“I’m glad to have a player who has a lot of experience and passion, as well as skills,” said Kiwoom’s Kim. “I expect the team to be strengthened once again with the addition of a veteran player in a club of young players.”