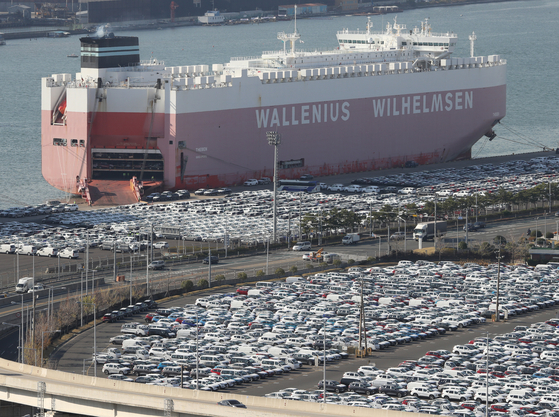 Vehicles waiting to be loaded on a ship headed overseas near Hyundai Motor's plant in Ulsan on Nov. 5. Korea's economy is expected to gradually recovery. However, KDI lowered its outlook for next year's growth citing an increasing number of coronavirus infections in other major markets. [YONHAP]


Korea’s main think tanks are holding their outlook for 2020 growth at minus 1.1 percent, unchanged for September forecasts.

One did make an adjustment, with the Korea Development Institute (KDI) on Wednesday lowering next year’s growth projection, citing the resurgence of the coronavirus pandemic in major countries. It warned also warned of the rapid rise of the national debt, which according to the finance minister on Tuesday exceeded 800 trillion won ($719 billion) as of September.

The KDI forecast the economy to expand 3.1 percent in 2021. That’s a 0.4 percentage-point adjustment downward from its outlook in September, when it projected a 3.5 percent growth in 2021.

“The second wave of Covid-19 around the world seems to be more serious and prolonging,” said Jung Kyu-chul, KDI researcher.

The latest outlook by the KDI is in line with many international research institutions.

The Organisation for Economic Cooperation and Development (OECD) has the same projection as the KDI, at a 3.1 percent growth in 2021.

The IMF has a more conservative estimate of 2.9 percent growth.

One of the key changes is the outlook for spending. Overall, consumer spending is expected to increase 3.3 percent. This is a slight adjustment from the 3.4 percent increase projected in September. Investment for 2021 has been adjusted from a 3.8 percent expansion earlier to 3.2 percent. Exports are expected to grow 3.1 percent rather than 3.4 percent.

One of the biggest concerns is the less optimistic forecast on jobs.

The KDI said due to the pandemic, hiring, especially in the service sector, will slowly recover.

The state research institute noted the need for expansionary fiscal policy as the possibility of a sluggish economy due to the global pandemic will likely remain.

It said while the fiscal and monetary as well as financial policies have cushioned the economy from further decline, the government needs to maintain its current loose policies until the recovery momentum becomes certain.

The institution raised alarm against the rapid rise of the national debt and noted the importance of adopting a fiscal rule that would set the limit on the ever-growing debt.

The Finance Ministry on Tuesday reported that the national debt exceeded 800 trillion won as of September, which is a new record due to aggressive fiscal spending, including four supplementary budgets approved this year alone.

Not only is this a significant jump from 37.7 percent in 2019, but it is the first time that the national debt ratio exceeds 40 percent. While Korea has no formal fiscal limit, the 40 percent level has been respected for decades.

Last month the Finance Ministry announced that it will adopt a 60 percent rule starting 2025.

“In the world, 92 countries have fiscal rules,” Finance Minster Hong Nam-ki said when announcing the government’s plan in October. “Among advanced economies, Korea and Turkey are the only ones that don’t.”

The government debt limit faced harsh criticism from the ruling Democratic Party, which argued that it wasn’t appropriate to announce a limit for government spending, especially during the pandemic.

“While currently [Korea’s] fiscal soundness is relatively better compared to other major countries, there is a need for [tighter] management considering the rapid growth of national debt,” Hong said. “We have come up with the fiscal rule to achieve both fiscal responsibility and fiscal soundness.”

Bracing for a perfect storm