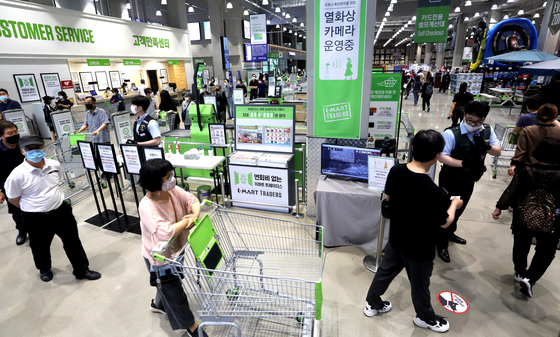 
Emart reported improved earnings in the third quarter, with operating profit jumping 30 percent on year. But its online operation remained in the red.

Net profit inched up 6.7 percent in the quarter to 119.9 billion won compared to a year earlier. That represented a 61.9 percent decline in net profit from the previous quarter, which saw an extraordinary gain after Emart sold land in Magok-dong, Gangseo District, in western Seoul.

It credited upbeat grocery sales and remodeling of old stores.

The online operation SSG.com remained in the red. But operating losses were reduced 86.8 percent from the same quarter last year to 3.1 billion won. Sales online climbed 36 percent on year to 980.3 billion won.

The Westin Chosun Hotel also continued to remain in the red with operating losses of 14.6 billion won in the third quarter, up 508 percent from 2.4 billion won a year earlier.

For the first time since the business began in 2014, convenience store franchise Emart24 turned a profit. Emart24, which operates 5,000 stores, generated 1.7 billion won in operating profit in the quarter.

“From now on, [Emart] will strengthen profitable businesses by offering differentiated groceries and expanding customer-centered stores,” the company said in a statement.