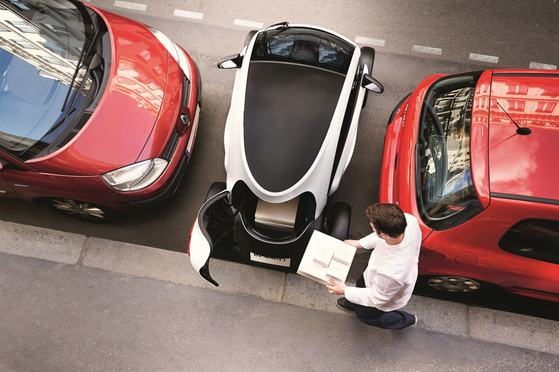 Twizy, which measures 2.3 meters (7.5 feet) in length, 1.2 meters in width, and 1.45 meters in height, is capable of squeezing through alleyways and into tight parking spots as it only takes up one-third of a regular parking space. Compact, if not micro, the volume of Twizy is what makes it an excellent choice in various service fields including delivery, sightseeing and public welfare.

Three and a half hours is all it takes to charge Twizy from a 220-volt electric socket, which can be found at home. This charge yields 55 kilometers (34 miles) to 80 kilometers of driving distance for a cost of 600 won (50 cents, or 100 won per kilowatt-hour). A maximum speed of 80 kilometers per hour and a back seat which can be turned into a 180-liter or 75-kilogram trunk are just some of the features that make Twizy ideal for short commutes or shopping trips.

Its pragmatic nature is indeed acting as a deciding factor in purchasing Twizy. According to a survey of 1,600 Twizy buyers conducted by Renault Samsung Motors, 62 percent answered that Twizy’s short-drive practicality was the reason for their purchase, while 73 percent said such benefit was the reason they would recommend Twizy to their acquaintances.

Twizy’s standout design was the reason for purchase for 47 percent of the buyers. Thirty-three percent said they would recommend the car for its design, and 14 percent said they were using Twizy for its notable look as means of advertisement.

Last but not least, the additional safety measures of Twizy enticed customers as well. As the Covid-19 pandemic persists, the demand for delivery and postal services have risen, adhering to the newly established “un-tact” atmosphere. Naturally, Twizy’s hermetic cabin, airbags, 4-point safety belts, and four wheels make Twizy tantamount to, if not a better alternative to two-wheeled-vehicles. Twenty-seven percent of buyers answered that its stability was the main reason for purchase. Twenty-six percent of buyers said they would recommend it to others for its safety.

Daegu top Champions League group to advance to round of 16