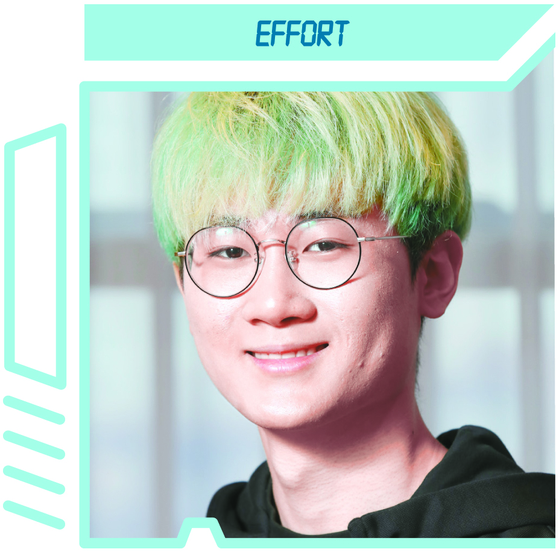 
Lee Sang-ho, or Effort in the League of Legends (LoL) arena, has been with T1 for nearly four years, making the 19-year-old one of the most established players on the team.

Lee plays "support," a sort of catch-all role that backs up the rest of the team and has to be able to turn their virtual hand to any in-game situation. That helps to explain Lee's handle — Effort by name, effort by nature.

“When I was about to start my pro career, our head coach told me to come up with a nickname,” Lee says. “While I was researching I came across the word 'effort' and it has a great meaning — hard work — so I decided to go with it.”

Unsurprisingly, given his position and choice of name, Lee is well known among fans for his hard work and calm, collected demeanor.

Born in 2000, Lee was still in middle school when the Esports industry started to develop and teammate Faker was first making a name for himself. Lee grew up loving LoL, looking up to those early stars, so when the opportunity came, turning pro was an easy decision.

“Just like the others, when I first started out, I just liked playing the game,” Lee says. “Looking at Esports from outside, it looks so cool, so I think that’s why I started.”


Realizing that you're good at a sport can be difficult. You might be the best football player in your hometown, for example, but that doesn't mean you can make it on the big stage. LoL makes things a little easier, and Lee was able to see very clear statistics that helped him understand exactly how good he could be.

“There’s an individual ranking level within the game,” Lee says. “As I moved up toward the top of the rank, I continued to gain confidence that I can do it.”

Lee turned pro because he was an outstanding amateur player. While turning pro allows him to play more and focus only on the game, he did struggle to adjust to the new lifestyle. The hardest thing for him was living together during the training season.

“Since we have to practice as a team, we live together,” Lee says. “Meaning we are given almost no time to ourselves. I would say that was the hardest part in the beginning.”

But despite the lack of alone time, T1 remains everything Lee dreamed of as a young teenager watching LoL tournaments.

“It’s my role model team,” says Lee. “T1 makes me feel like I have to work harder every time, for the good of the team.”

Playing for T1, Lee says he has experience winning a number of League of Legends Champions Korea tournaments, but he has never won an international tournament.

While his plan for Effort is to pick up every trophy available, as Lee, his goal is a lot more personal.

“I want to act sincerely, work hard and have no trouble,” Lee says, “and be healthy at all times.”