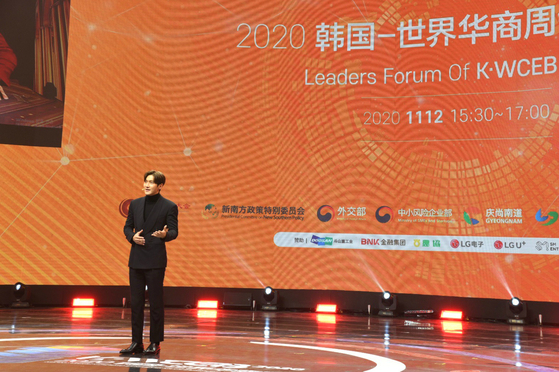 
Siwon of Super Junior shared his experience as part of the 10-member group during a speech at the “2020 Korea-World Chinese Entrepreneurs Business Week” on Thursday, according to SM Entertainment Friday.

Siwon, whose real name is Choi Si-won, discussed how Korea will be a leading power in the future entertainment scene at the opening ceremony in Changwon, South Gyeongsang, for the online event.

“Since our debut in 2005, the group had released over 100 albums as a whole, as part of a subunit, or as solo singers,” said Siwon. “We showed synergy that only a large-member group can have when Korea wasn’t so familiar with the concept of a subunit under a group.”

Since the hit song “Sorry, Sorry” in 2009, the group spawned many hits, the singer explained, while adding that producer Lee Soo-man of SM Entertainment’s focus on so-called “culture technology” was the key to the group's success in the entertainment scene. He added that many online concerts and other digital interactions between artists and fans were possible thanks to that direction.