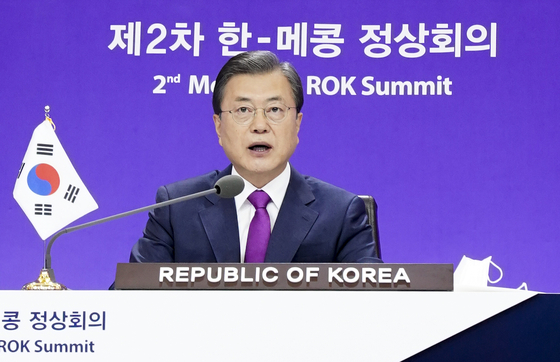 President Moon Jae-in on Friday speaks from the Blue House during a virtual summit between Korea and five Mekong River countries. [YONHAP]


President Moon Jae-in on Friday pledged $10 million to a global project to supply the Covid-19 vaccine to developing countries.

Moon made the promise during a virtual summit with leaders of five Mekong River nations in Southeast Asia: Vietnam, Cambodia, Myanmar, Laos and Thailand.

“Korea will contribute $10 million to offer coronavirus vaccines to developing countries through the Covid-19 Vaccines Advance Market Commitment [Covax AMC]," Moon said during the meeting. “We will cooperate with Mekong River countries to ensure universal and equitable access to vaccines. We will also continue putting efforts to maintain a system to guarantee travel by essential personnel.”

Covax is a multilateral coalition designed to support the development and equitable distribution of the Covid-19 vaccines and treatments. According to the World Health Organization (WHO), 184 countries joined the initiative as of October.

According to Blue House spokesman Kang Min-seok, the five Mekong nations' leaders all expressed appreciation to Moon for supporting their infection control and prevention measures.

During the summit, Moon also proposed to elevate the Korea-Mekong River nations' cooperative relationship to a strategic partnership, and the leaders of the five countries agreed, Kang said.

According to Kang, Korea has formed strategic partnerships with 20 countries and Asean. He said Korea welcomes the addition of the Mekong countries, known for their large amounts of manpower and water resources.

Moon also promised to put more effort, in cooperation with international organizations such as the United Nations, into preserving the environment of the Mekong River, managing water resources and preventing national disasters. “To this end, Korea will continue to increase its contributions to the Korea-Mekong cooperative fund and Official Development Assistance,” he said.

During the summit, the second of its kind, Moon and the Mekong counties’ leaders adopted a joint declaration. They agreed on specific projects for the seven cooperative visions they adopted during the first summit in Busan in November 2019.

According to the joint declaration, Korea and Mekong River countries agreed to job training and higher education projects. They also agreed to designate 2021 as the year of Korea-Mekong exchanges.