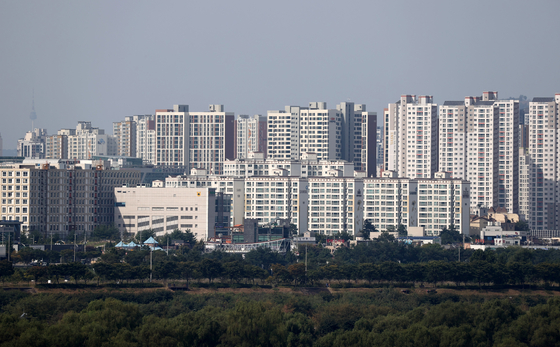 Apartment complexes in Hanam, Gyeonggi. Apartment transactions have been rising in Gyeonggi. [YONHAP]


As real estate prices in Seoul rise, people are flocking to Gyeonggi to buy apartments.

Real estate website 10,000-lab on Wednesday released an analysis of the Korea Appraisal Board’s (KAB) report on apartment transactions by region from January to September. The statistics revealed that Seoul residents purchased 33,695 apartments in Gyeonggi during the period this year, the highest number since KAB started compiling such data in 2006.

The data also showed that Seoul residents preferred Goyang out of all parts of Gyeonggi. In the first nine months of 2020, Seoul residents purchased 4,246 apartments, nearly double the average of previous years, which was around 2,200. Goyang’s popularity was followed by Namyangju with 3,436 units, Gimpo with 2,995, Yongin with 2,920 and Uijeongbu with 2,184.

The rate of increase was highest for Gimpo. In previous years, Seoul residents purchased an average of 288 units there. Gimpo is one of the regions not included in the government’s toughest real estate regulations, and has benefitted from the so-called balloon effect, in which money flows from areas with tight regulations to those with looser ones.

The decision to shop outside of Seoul had a lot to do with the rise in prices, not only of apartments for sale but also those leased on jeonse, or long-term deposit contracts.

In October, the median jeonse price in Seoul hit 508 million won ($456,512) — breaking the 500-million-won mark for the first time ever. The median rose by 8.2 percent from July’s 469.3 million won, which was before tenant protection laws went into effect in late July. 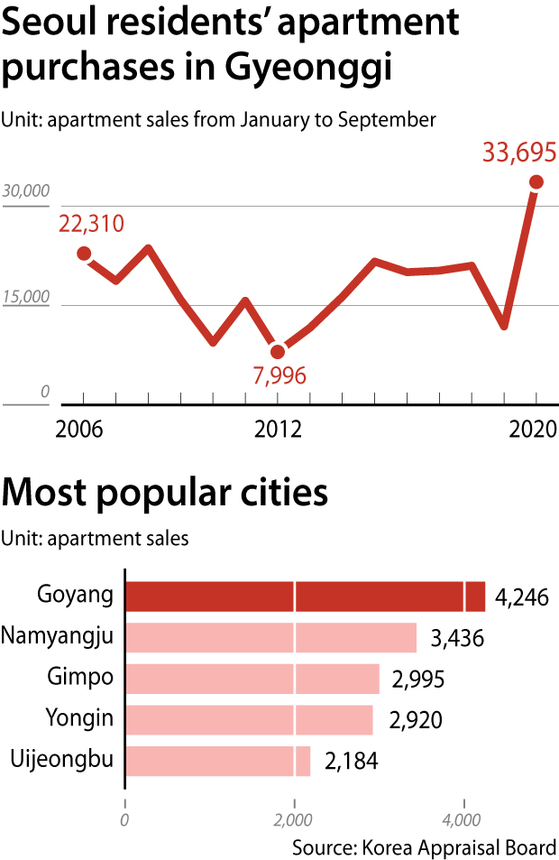 The increased demand has boosted prices of Gyeonggi apartments. In new residential complexes near subway stations, prices have reached new heights. According to the Ministry of Land, Infrastructure and Transport, an 84-square-meter (904 square feet) unit in Ilsan Yojin Y City, a high-rise apartment complex in Goyang, Gyeonggi known for its proximity to transportation, was sold on Oct. 28 for 960 million won — 45 million won or 4.9 percent higher than the sale of an identical unit in August, which was 915 million won.

In Gimpo, the number of apartments that saw 200 to 300 million won price increases spiked after the tenant legislation laws went into effect this year. On Oct. 23, a 112-square-meter unit, which is around 33.88 pyeong, in Pungmu Central Prugio apartments in Gimpo sold for 1 billion won on Oct. 23. In July, the same sized unit sold for 730 million won. The increase was 270 million won, or 37 percent.

“These days, a lot of people have been coming from Seoul to check out the houses,” said a real estate agent near the Pungmu Central Prugio apartment complex. “The prices of 84-square-meter apartment units in newly built residential complexes with easy access to Seoul and immediate availability have climbed into the 700 million won to 800 million won range.”

Real estate experts project that purchases of Gyeonggi apartments by Seoul residents will continue to increase.

“The rise in Seoul’s jeonse prices is inevitable because the supply of private apartments decreased, and there is also demand from people who have submitted apartment applications and are seeking capital gains,” said Hwang Han-sol, a researcher at 10,000-lab. “Apartment purchases in Gyeonggi will go up mostly due to the fact that people are tired of the jeonse quagmire.”

“If jeonse prices rise along with apartment prices in Seoul, prospective homebuyers inevitably get pushed to the outskirts of Seoul and Gyeonggi,” said Ahn Myung-sook, head of the real estate team at Woori Bank. “If the jeonse crisis continues, apartment prices in Gyeonggi will rise, and Seoul’s housing prices, which have been stable for a while, can also rise again.”

Nothing to see here