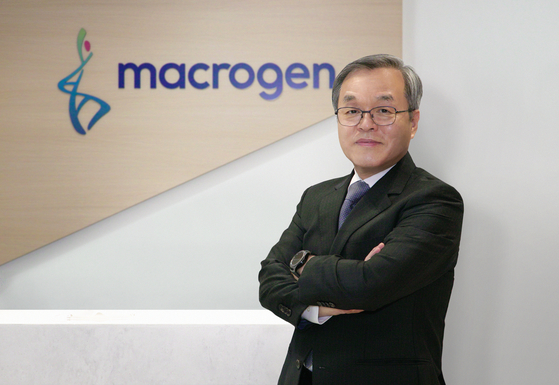 
When it comes to Korea’s bio industry, the development of new drugs is always the focus of news reports. That sentiment has been boosted more than ever as domestic companies join the race to develop a Covid-19 treatment and vaccine.

But Korea Biotechnology Industry Organization (KoreaBIO) President Seo Jeong-sun thinks that big data, not drug development, should be the real focus of Korea's bio industry, and it is here, Seo says, that Korea can really become a global leader in biotechnology.

KoreaBIO is a 12-year-old business advocate group of biotech firms, with Seo heading the organization for more than half of that period.


“The future of bio health care is in medical services,” he said. “The aging population is the biggest crisis of the 21 century. If people start living up to 120 years, that’s going to create medical costs that society can’t sustain. Predicting illnesses using gene data is important because it suggests a way to reduce that price.”


The biggest obstacles, however, are regulations and state officials who are not enthusiastic about changing old practices.


Seo himself is a prominent businessman in Korea’s biotech scene. His company Macrogen, where he serves as chairman, was the first bio venture in the country to go public on the secondary Kosdaq market in 2000. Operating across 153 countries, its main field of business is precision medicine, which refers to predicting potential illnesses based on genetic information.


A medical professor at Seoul National University with a specialty in genomic medicine, Seo was one of the first batch of national university professors to run a business using the outcomes of his lab — a practice that was only permitted in 1997 under a venture promotion act.


The Korea JoongAng Daily sat down with Seo to look back at the past two decades of Korea’s bio industry, and consider where it stands today and the pending tasks to push further growth.

Below is an edited excerpt of the interview on Oct. 12.


Q. How would you summarize the past 20 years of Korea’s bio industry?


The bio industry wasn’t always popular. People associated drugs with the pharmaceutical industry, but not with bio. That changed in 2000 with the human genome project. This was the point when Koreans first started using the term biotechnology.


But as an industry, there were doubts for a long time. In the very early days, everybody thought the bio industry suggested a rosy future but years later, it turned out none of those firms were actually making money. Critics started saying it was all a scam and the bio venture boom withered away.

Now Covid-19 has confirmed the strength of Korea’s biotech industry. But domestic firms also face challenges to overcome the high expectations, development costs and the race in time to develop vaccines against the pandemic.


Q. You seem to have high expectations for precision medicine. Why is this so?


The big revolution in medicine is being able to make predictions based on one’s gene data. Medical information in the past was about diseases, not the individual. That’s why we had to treat patients based on disease protocols without considering the person. Now, we can use one’s genetic sequence to predict which disease is likely to affect a person.

Our biggest issue since the new millennial is an aging population and the consequent spike in health care costs that society can’t sustain. Living up to 120 years may sound like a dream but in fact it’s a 21st-century crisis that could make governments bankrupt. Precision medicine is the answer to avoid that scenario.

Predicting diseases using one’s genetic information can push down medical costs, not only for the individual but on a social level. That’s biotechnology’s task as an industry, not just for profit-making but for the sake of human sustainability.


Q. Why do you think Korea has a chance to lead in this segment?


Korea has a strong foundation in life science and biotech research, which started in the 1990s with government funding. In medical services, Korean hospitals long adopted electronic medical records and charts, which set the grounds for data medicine. Genetic information has piled up as well thanks to years of bio venture investment in the field.


The past 20 years was a period of education. Macrogen showed that a business model using gene data can actually work. That pulled in a score of other companies to join the field but also trained investors showing what biotechnology is about.

Of course, there have been risks. I am aware of the game in the financial market where prices fluctuate and I think this should be contained. But uncertainty is inevitable in biotechnology: Nine out of 10 projects fail. Overall, Koreans now have a better understanding of what venture investment is, how this finance market works and a stronger urge to find potential companies in the bio field.

In short, we’ve reached a stage where the strong medical system, accumulated gene data and government investment could all work together to create a big wave in Korea’s bio industry.


Q. As an ecosystem, the bio industry consists of multiple players: Researchers, companies, investors and the government. Which of them do you believe holds back the bio industry’s rapid growth?


As for investors that are in charge of the funding, they should take a longer approach in their investment decisions. It takes six to nine years for young ventures, even with support from large companies, to succeed in developing a business model.

A common pattern in Korea is that investments are temporary and investors exit on a short-term basis. This is dangerous, yet widespread. In the end, that’s an individual decision. There’s not much we can do to stop them.

What’s more important is the government’s role. They should take a careful but radical approach when it comes to improving regulations. Using one’s genetic information at the moment goes against multiple private security laws and can put companies behind bars.

The government should come up with guidelines that specify purposes which unidentified data can be used for. Of course, there should be a strong penalty for crossing the line, but within a certain boundary, companies should be given the autonomy to try what they want.

The government talks as if Korea is going through dramatic regulatory reform. But when you actually meet government officials, they’re scared. Their stance comes down to “What if something goes wrong? Who's going to be held accountable?”


Biotechnology is Korea’s last growth engine and we’re passing our golden hour. That’s why a paradigm shift in the government’s approach to policy is so urgent in realizing change.

Q. What kind of regulatory support do you think is most needed for bio firms?


The government needs to stop trying to directly engage in boosting this industry. What companies really need and have constantly demanded is a negative regulatory system which has strict restrictions on things that cannot be done, but allows everything else. Creating a free environment is of utmost importance for the biotech industry, more so than any other business field.

Now that domestic companies have started to make visible outcome, the government should stop acting like it's at the helm of developing the bio industry and instead take on a more flexible attitude. Ensuring autonomy to companies would be the start of a big leap.


One task where the government’s role is actually important is elevating the biotech workforce in the country, which is hugely understaffed. We particularly need data scientists who have knowledge in life science. At the moment, the two job segments are strictly divided. There needs to be a means of motivation or a policy to drag people from one side to another.

If we don’t prepare this workforce in advance, the medical big data market will eventually be dominated by foreign firms and Koreans will end up spending money instead of earning it.


Q. Telemedicine is an area that’s linked to both data and medical services. Korea at the moment is falling behind the global trend as the law does not allow telemedicine in any form, except for certain coronavirus patients. As a doctor and service provider of medical data, how do you think we can see progress in this field?


Telemedicine is not just a way to enhance accessibility for patients in remote areas. It’s the fourth industrial revolution in the field of medicine that combines information technology and health care.


Korea boasts the advanced-level technologies required in telemedicine and yet the practice itself is banned. It’s one of 10 or so OECD countries that do not allow telemedicine. Covid-19 offered a temporary relief in diagnosis via phone calls, but even that limited relaxation was attacked by large-scale strikes staged by medical students in August.

The only way to make discussions go forward is trust. The relation between the government and doctors at the moment is intense. Covid-19 and the temporary relaxation could have been a breakthrough by making doctors think telemedicine isn’t as bad as they imagined. That’s when the government should have stepped in to suggest comprised plans and cooperation for progress.

It is positive that telemedicine was included as part of the administration’s new deal initiative. This raised the possibility of relevant laws passing the 21st National Assembly. However, opposition from doctors remains fierce, not to mention that the government and political parties lack a consensus on their approach to telemedicine. There are many struggles ahead in reforming the medical law.