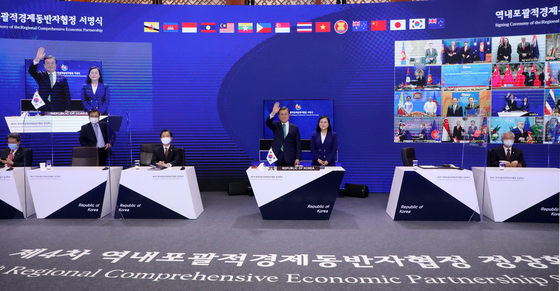 Korea is now part of the world’s largest FTA, after on Sunday it became the latest signatory to the 16-country pact spearheaded by China.

President Moon Jae-in on Sunday signed the Regional Comprehensive Economic Partnership (RCEP) virtually from Seoul, opening up a massive market that includes neighboring economies China and Japan, as well as Australia, New Zealand and the 10 members of Asean.

Korea now has access to a $26.3 trillion market, which accounts for 30 percent of the global economy. Countries under the RCEP account for 28.7 percent of global trade and amount to 29.9 percent of the world's population.

The Asia-centered trade pact is roughly double that of the United States-Mexico-Canada (Usmca) Agreement, or the Comprehensive and Progressive Agreement for Trans-Pacific Partnership (Cptpp). Those two pacts account for $11.3 trillion and $2.9 trillion in trade, respectively.

The heads of states through a joint statement emphasized the importance of the trade pact amid a global economic crisis brought on by the coronavirus pandemic.

“The RCEP Agreement is critical for our region’s response to the Covid-19 pandemic and will play an important role in building the region’s resilience through inclusive and sustainable post-pandemic economic recovery processes,” the joint statement said. “We are confident that the RCEP Agreement will open a vast range of opportunities for businesses located in the region, especially in terms of market access, given the level of liberalization for trade in goods and services and investment.”

During the virtual meeting of heads of state, Moon said the RCEP not only launched a major economic community amid the global crisis, but has also made the world realize the importance of free trade, according to the Blue House on Sunday.

“We will overcome the coronavirus crisis together through RCEP, which will lower trade barriers, coordinate standards and accelerate mutual exchanges and cooperation,” Moon said.

He added that such cooperation among the RCEP members should not be limited to trade and investment, but broadened to include society and culture.

The signing of the trade pact is likely to have significant geopolitical impacts, including stronger regional cooperation. But there are doubts as to how much economic benefit it will provide for Korea, which is already among world leaders in terms of the number of bilateral FTAs it has signed.

Starting with the country’s first FTA with Chile in 2004, Korea currently has 16 bilateral FTAs in effect, including with the other signatories to the RCEP, aside from Japan.

The Korean government argued the regional multilateral trade agreement will benefit the country, since it relies heavily on exports.

The Blue House cited an example of an automotive parts supplier in the Chungcheong region, which currently faces a maximum 40 percent customs tariff when exporting to Indonesia. With the RCEP its customs tariffs will be lowered to zero, the Blue House said.

The Blue House also stressed that the multilateral trade agreement will protect intellectual property, including Korea's increasingly popular cultural offerings, such as K-pop and TV shows.

The Korean Ministry of Trade, Industry and Energy said the RCEP will have more of an effect on lifting tariffs than its existing bilateral FTAs.

For the Asean market, the pact will lift tariffs on between 91.9 percent and 94.5 percent of Korea's exports, compared with existing agreements that lift between 79.1 percent and 89.4 percent of those tariffs.

The Korean Trade Ministry stressed that industries producing automobiles, auto parts, steel, fabric, machinery and medical equipment will all benefit substantially, and noted that since the bilateral trade agreement with the Asean economic block was enacted in 2007, exports to the region have more than doubled.

Korean consumers are also expected to benefit from the RCEP, as the tariffs imposed on tropical fruits will be lowered.

But because automobile and machinery industries are important to both countries, tariffs will not be lifted on those products.

In a preliminary report released a year ago, the Korea Institute for International Economic Policy projected that Korea’s economy will see a 0.41 to 0.62 percent of additional growth if the RCEP is enacted.