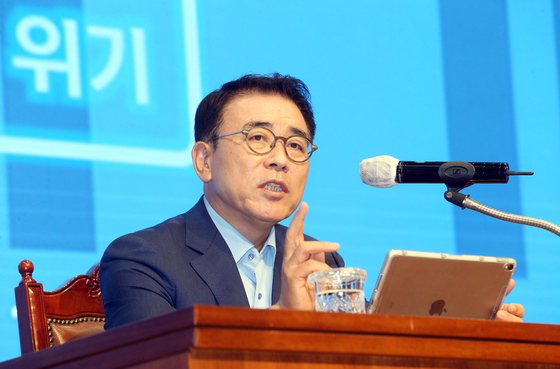 Cho Yong-byoung, Shinhan Financial Group chairman in announcing the banking group second half business plan in July at the bank's headquarters in Seoul. Cho on Nov. 15 announced a plan of carbon neutrality by 2050, the first financial group to do so in East Asia. [NEWS1]

Shinhan Financial Group on Sunday announced its “Zero Carbon Drive,” which includes not only participating in its own efforts to reduce carbon emissions but also no longer providing loans or investing in companies with high carbon emissions.

Shinhan said it is the first among financial groups in East Asia to announce such zero-carbon emissions plans.

It will be cutting back 46 percent of its carbon emissions by 2030 and 88 percent by 2040 in accordance with the Science Based Target initiative (SBTi) proposed under the Paris Agreement.

Additionally, it will cut carbon emissions from its asset portfolio by 38 percent by 2030 and 69 percent by 2040.

Additionally, it will create a database that will monitor and manage carbon emissions of companies in its asset portfolios.

While global warming has become a real threat, major countries have been speeding up their carbon emission reduction efforts.

President Moon Jae-in during a speech at the National Assembly last month proclaimed carbon neutrality for the country by 2050.

He stressed that Korea will replace its energy supplies from conventional fuels including coal-fired power plants to renewable energy.

“Along with the international community which is actively combating climate changes, we will target carbon neutrality by 2050,” Moon said.

China and Japan recently announced their own plans for carbon neutrality. While Japan announced achieving its goal by 2050, China has set its target at 2060.

Other global financial companies, such as HSBC, Barclays and ANZ, have also been making plans for zero carbon emissions and have reflected their goals in their business plans.

Shinhan has been aggressively participating in efforts to protect the environment.

In 2008 it was the first Korean financial company to join the United Nations Environment Programme Finance Initiative (UNEP FI). In 2013 it was listed on the Dow Jones Sustainability Index and in 2014 joined the Carbon Disclosure Project’s Carbon Management Honors Club.

A week ago, Shinhan Financial Group CSO Park Sung-hyun was appointed as a new member of the UNEP FI’s Global Steering Committee, the first for any Korean.