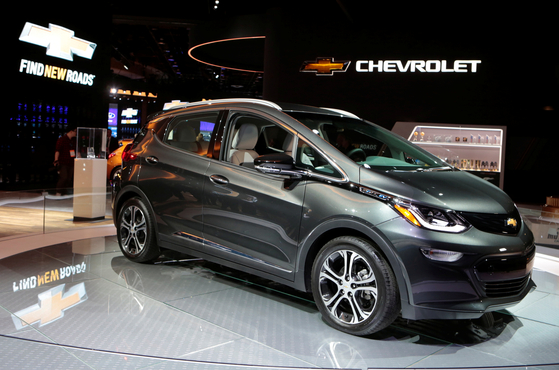 A 2018 Chevrolet Bolt EV is displayed during the North American International Auto Show in Detroit. [YONHAP]

Chevrolet Bolts manufactured between 2017 to 2019 will be subject to recall, starting Nov. 17. The recalled vehicles were topped with batteries made at LG Chem's Ochang factory.

The pre-emptive measure comes as the U.S. automaker considered the batteries to “pose a risk of fire when charged to full, or very close to full, capacity.”

Previously, the U.S. National Highway Traffic Safety Administration received two reports of the cars, one from 2018 and the other from 2019, catching fire under the rear seat. The office then found a similar case involving a 2017 model. General Motors said it's currently working with the investigation office to identify the exact cause.

Owners of the affected vehicles could receive software upgrades which will limit the maximum charge rate to 90 percent, the U.S. carmaker said.

The company also requested that car owners change the vehicle charge settings to use the Hill Top Reserve option, which can help reduce the risk of fire. Car owners were also asked to refrain from parking their vehicles in a garage or carport before the necessary changes are made.

This isn't the first time a carmaker announced a major recall over its EVs.

In October, Hyundai decided to recall around 77,000 Kona EVs sold around the globe after 14 incidents in which the vehicles caught fire were reported. The cars were topped with batteries made from LG Chem’s manufacturing plant in Ochang.

BMW expanded its recall over a number of its plug-in hybrid EVs due to a potential battery issue. The battery in question was made by Samsung SDI.

Tesla also decided to recall 30,000 vehicles of two models — the Model S and the Model X — in China, after it found suspected defects in the batteries’ module, made by Japan’s Panasonic.

Chinese authorities initiated an investigation into EV model Aion S by GAC Motor, after reports that the vehicles had burst into flames in May and August this year. The vehicles were topped with lithium-ion batteries made from Chinese CATL.