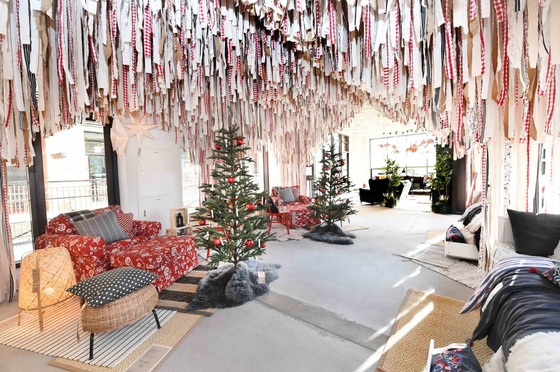 
Once an industrial area packed with factories in the late 20th century, renovated buildings in the Seongsu neighborhood in Seongdong District, eastern Seoul, are now becoming hot spots among younger generations who are in love with the “newtro,” a portmanteau of new and retro, trend. The Korea JoongAng Daily visited three new spaces that have recently opened in the area — Ikea Lab, Louis Poulsen and Ground Seesaw Seongsu. 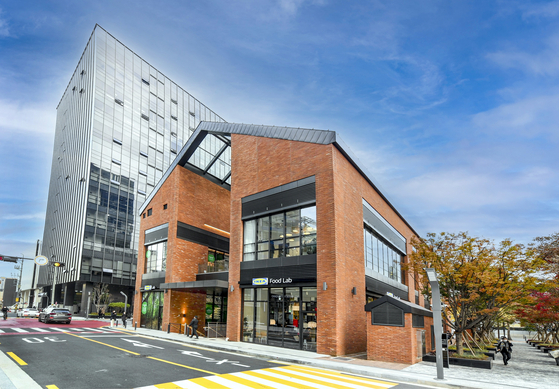 
Anyone who has visited Ikea warehouses in the suburbs would agree that getting through the vast space for a thorough look at all the items on offer is a challenge.

In comparison to its overwhelmingly large counterparts, some as big as 65,000 square meters (700,000 square feet) in the case of Ikea’s Gwangmyeong branch in Gyeonggi, the newly opened Ikea Lab, a two-story building that is 914 square meters in size, allows visitors to take a peek in a much more compact space. 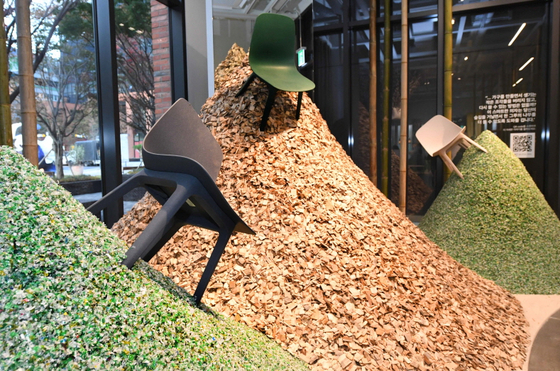 Ikea's chairs made out of recycled plastic. [IKEA KOREA]

The Swedish furniture giant that first entered the Korean market in 2014 opened its Ikea Lab in Seongsu this month. It is Ikea’s third mini store to open in Seoul this year, followed by Ikea Planning Studios in Cheonho-dong in eastern Seoul and Sindorim-dong in western Seoul. 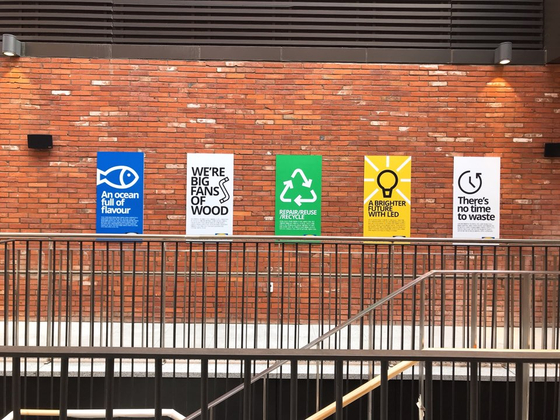 Those who are interested in environmentally friendly habits are welcome to explore Ikea’s philosophy regarding sustainable growth by taking a look at its sustainable home furnishing goods and sustainable eating habits.

Chair made from recycled plastic and Christmas tree ornaments made of leftover fabric are just a few of the collections that Ikea Lab presents to deliver its corporate vision. 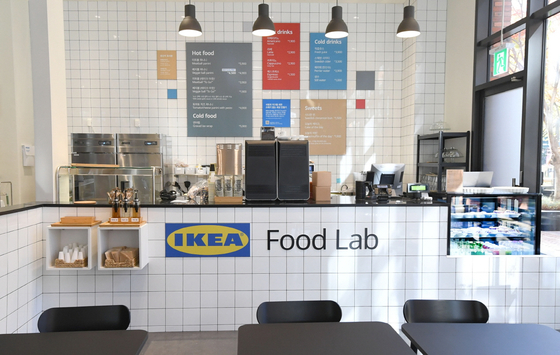 Ikea Food Lab located on the first floor of the building offers a range of vegetarian and plant-based food products such as vegetable balls. Those who want to explore some Swedish treats are welcome to try Swedish waffles and oat biscuits that are sold at Ikea Food Lab.

“We hope to spread sustainable home furnishing habits and eating habits in a convenient and affordable way through Ikea Lab," an official from Ikea Korea said.

The pop-up store will run until April 20 next year. The store opens every day from 11 a.m. to 9 p.m. Interior design consultation service requires a reservation. For reservations, visit www.ikea.com/kr/ko/ 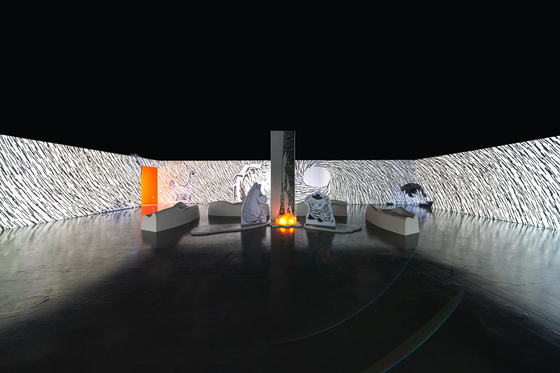 
For those who think of trolls as mean and ugly creatures, visit the new cultural venue opened in Seongsu to meet some adorable trolls who teach love, friendship and coexistence through the Moomin special exhibition.

Ground Seesaw Seochon opened in June and is currently running a special exhibition on one of the most beloved webtoon series on Naver webtoon “Yumi’s Cells,” that has accumulated 3.2 billion views.

“We chose Moomin as the opening exhibition because it goes well with Ground Seesaw's purpose, which is to take motifs from subject matters that are familiar to the younger generations and host exhibitions that are familiar and new at the same time,” Ji Sung-wook, a CEO of Media & Art, the exhibition organizer, said.

While there was already a previous exhibition on the same characters in 2017, the host of the previous event said the current exhibition in Ground Seesaw is much greater in size.

It not only displays the original artworks of Jansson but also special interactive artworks such as a replica of Jansson’s room and selected episodes from a 2019 Finnish-British 3-D animation series “Moomin Valley.”

In the room that houses Jansson’s rough sketches of Moomin, there are even the very first Moomin sweets launched in 1957 in collaboration with Jansson and the Finnish leading confectionery company, Fazer.

"We tried to satisfy all five senses with various interactive artworks such as 3-D animation and projection mapping art," Ji said.

Each of the 13 different rooms in the venue has a different theme so that visitors can enjoy the Moomins in various moods.

The organizer explained the ultimate message of the exhibition is to address how the Moomin characters overcome difficulties with family and friends.

“Although we didn’t intend it, the message that Jansson gives fits perfectly at this time when everything seems to be uncertain. Through this exhibition that deals with the adventures of Moomin families, we hope to share Jansson’s words of encouragement to enjoy and live each moment in life,” Ji said.

Ahead of the launch of "Moomin Original: Moomin 75th Anniversary Special Exhibition," Pekka Metso, the Finnish ambassador to Korea, said the exhibition in Seoul will bring positivity and happiness.

“In this precarious time, it’s important to think like a Moomin and find joy in the small things in life,” Metso said. 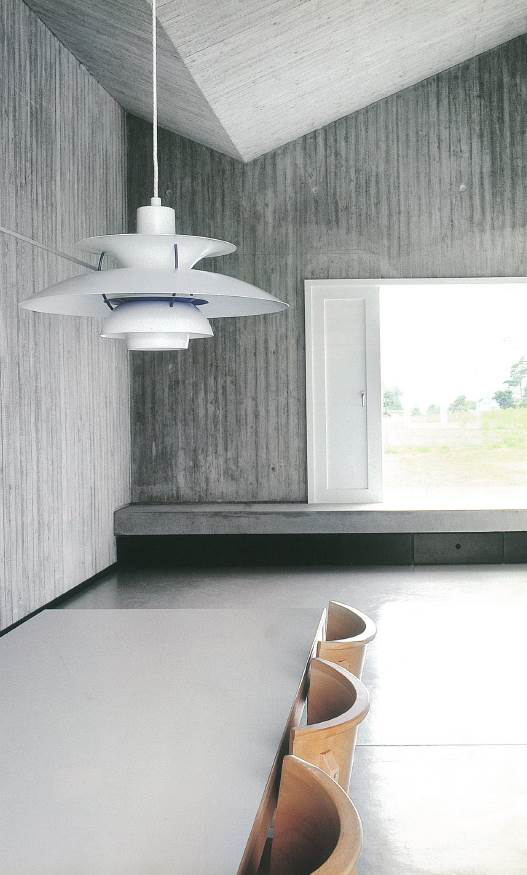 Louis Poulsen's PH 5 pendant light, the most iconic design of the brand that has gained global popularity. [LOUIS POULSEN]


Louis Poulsen in Seongsu presents a special lighting experience that gives a different ambiance depending on the time and place.

The Danish lighting manufacturer founded in 1874 chose the Seongsu neighborhood to open its first official store in Asia last month. 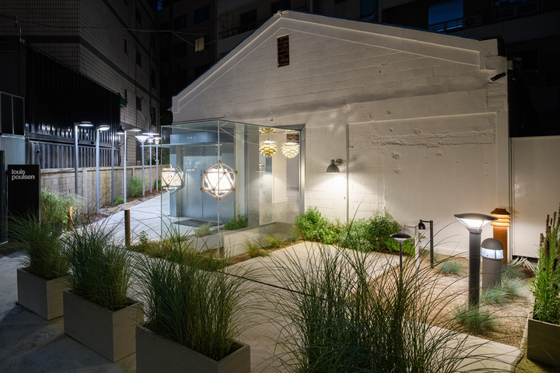 OE Quasi Light is displayed in front of the entrance of Louis Poulsen Seongsu. [LOUIS POULSEN]

In front of the entrance, a warm pendant light that stays lit from day to night welcomes visitors. It is the OE Quasi Light, a collaboration between Louis Poulsen and world-renowned Icelandic-Danish artist Olafur Eliasson.

The showroom has a cozy and comfortable atmosphere so that not only the experts — the designers and architects — but also ordinary customers who are not familiar with lighting can enjoy the permanent display of the brand’s complete decorative, architectural and outdoor collections.

The building was a cardboard factory in the 1960s, and despite renovations, the original wooden frames and water tank were preserved as an homage to the history of the space. The mixture of the preserved structure of the building and Louis Poulsen’s modern lights present a coexistence of the industrialization era and the modern era.

The managing director of Louis Poulsen Asia, Christian Seiffert, said the brand's long history of craftsmanship and heritage blend well with the deep history of Seongsu.

“Seongsu has been known as a thriving district in Seoul with many small-scale shoe factories during the late 20th century,” Seiffert said. “Today, Seongsu has grown into a hip area filled with contemporary art galleries, design and lifestyle stores, trendy cafes and a cultural mix of restaurants. When we toured this historic and flourishing area for the first time, we instantly knew that this was the perfect location for a Louis Poulsen mono store in the beautiful city of Seoul.”

Louis Poulsen Seongsu also plans to launch lectures and workshops in the future for designers and architects who wish to learn about lighting design.

The store opens every day except on Mondays and the operating hours differ depending on the day of the week. For more information, visit http://www.louispoulsen.com/ 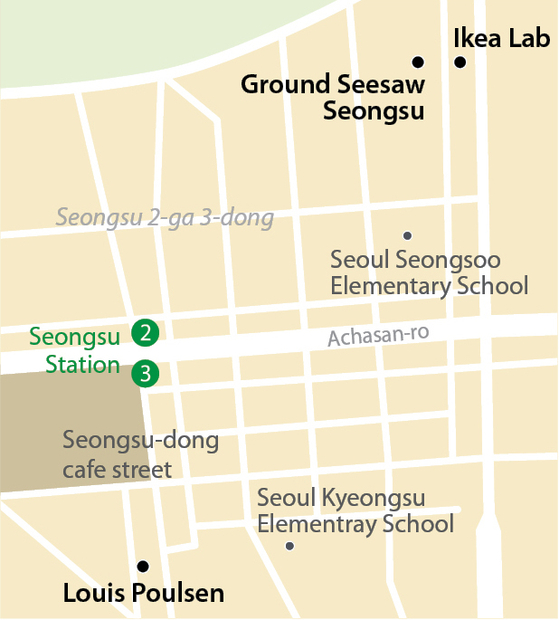