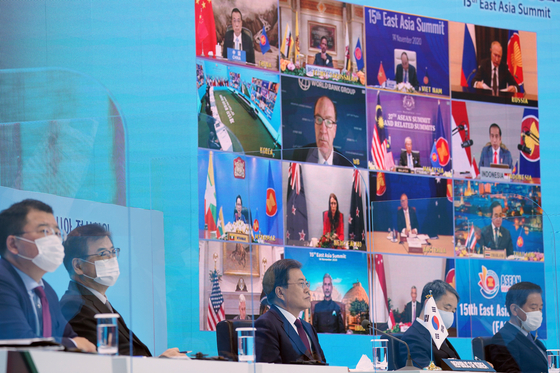 
President Moon Jae-in on Saturday stressed the need for multinational cooperation to combat the coronavirus to enable the success of the upcoming summer and winter Olympics in Tokyo and Beijing.

Addressing other heads of state in the 15th East Asia Summit on Saturday, Moon said should the two Olympics be successfully carried out with the cooperation of members states, “we will be able to build hope about overcoming Covid-19.”

The East Asia Summit is a regional forum held annually among 16 countries in East, South and Southeast Asia, and is hosted by Asean.

Like the preceding Asean Plus Three Summit and the succeeding Regional Comprehensive Economic Partnership (RCEP) Summit on Sunday, the event was held remotely with leaders communicating through video conferencing software.

At the Aesan Plus Three Summit, which includes Korea, China and Japan, Moon also called for improving cooperation between member states to focus on the fair supply and distribution of Covid-19 vaccines, as well as the creation of a “pre-emptive” multilateral mechanism with which the region can address infectious diseases in the future.

These proposals appear to be part of a larger plan Moon outlined in his address to the United Nations General Assembly in September, in which he pitched the creation of a regional public health initiative involving China, Mongolia and Japan, as well as North Korea.

Moon also took the opportunity in his address at the Asean Plus Three Summit to deliver a special acknowledgement to Japanese Prime Minister Yoshihide Suga, as the online summit was the first time the two leaders have engaged diplomatically since Suga came to power in September.

With a new president in Washington expected to be more accommodating toward U.S. allies across the globe, Seoul has been taking the initiative in attempting to engage Tokyo to repair the neighbors’ fraught relations over the issue of wartime forced labor.

The friction remained apparent even after Suga replaced former Prime Minister Shinzo Abe, under whom Tokyo has assumed a punitive attitude toward Seoul regarding outstanding historic disputes.

Suga reportedly has been holding out on attending a trilateral summit — including China — in Seoul planned later this year, on the condition that Moon takes measures to block the liquidation of assets owned by a Japanese firm ordered by Korea’s Supreme Court to pay damages to forced labor victims.

A delegation of Korean officials, led by influential ruling Democratic Party Rep. Kim Jin-pyo, met with Suga in Tokyo on Friday to propose the idea of holding a bilateral summit “as soon as possible” to resolve differences.

Suga, according to Kim, said something along the lines of “alright,” which multiple Japanese outlets suggested did not denote an affirmative answer.

According to Tokyo’s Yomiuri Shimbun, Suga asked the Korean delegates to convey to Moon that Korea should create the conditions necessary to resolve the issue, suggesting the Blue House’s offer to offer Korea’s cooperation with the Tokyo Olympics was insufficient.

Yomiuri further noted that should Seoul move first to stop the liquidation, Tokyo may be angling to hold a bilateral summit on the sidelines of the trilateral meeting to announce a resolution to the forced labor issue as well as Japan’s retaliatory restrictions on industrial exports to Korea.