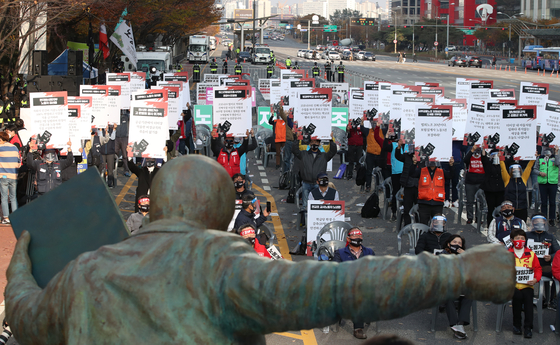 Thousands of labor activists took to the streets Saturday to honor the 50th anniversary of the death of Jeon Tae-il, a labor rights icon who immolated himself at age 22 to protest poor working conditions of Korean factories.

The rallies took place in some 50 locations across the nation, mostly in Seoul, as the organizers vowed to space out their participants to comply with social distancing guidelines. Demonstrations in Seoul were mostly capped at 99 participants, but larger crowds showed up outside the capital.

The rallies came at a precarious time in Korea’s fight against the pandemic, with daily cases hovering above 200 for a second consecutive day over the weekend, and amid warnings from health authorities that the social distancing level for the greater Seoul area — Seoul, Incheon and Gyeonggi — could soon be raised from the current Level 1 to Level 1.5.

Health officials last Friday urged the Korean Confederation of Trade Unions (KCTU) — which orchestrated the Saturday rallies — not to hold the demonstrations, warning they could cause virus cases to spread all throughout the country.

Protests have always elicited worry from health authorities, especially after a large-scale antigovernment rally at Gwanghwamun Square in central Seoul on Aug. 15 led to a cluster of nearly 650 confirmed coronavirus cases, making it one of the largest hot spots Korea has ever seen to date.

Even President Moon Jae-in pleaded with the KCTU to “reconsider” the rallies in a Facebook post Friday, stressing that public health outweighed freedom of assembly in times like these. Moon warned that his government would have no choice but to “sternly press charges” against the organizers if their rallies cause the virus to spread, saying public cooperation was desperately needed for cases to drop back down again.

Lawmakers of the main opposition People Power Party (PPP) accused Moon and his administration of holding a double standard against the protests, compared with how they treated right-wing civic groups ahead of their Oct. 3 and Oct. 9 rallies. In late September when the civic groups announced plans to hold rallies the next month in Seoul on the heels of the Aug. 15 cluster, Moon accused the organizers of committing “antisocial crimes."

On Oct. 3 and Oct. 9, the entire city was subject to a congregation ban imposed by the Seoul Metropolitan Government prohibiting any rallies involving 10 or more people, which is why conservative activists had to rally in tiny groups. As coronavirus cases dropped last month, the Seoul Metropolitan Government eased the ban to allow rallies to be held with up to 99 people.

The Saturday rallies organized by the KCTU and its affiliates began at around 2 p.m. in about 30 places in Seoul and 13 places outside the capital, including Daejeon, Busan, Jeju Island and North Chungcheong.

Some 7,000 police officers were deployed to make sure the small protests didn’t grow into mass crowds, and police buses cordoned off the National Assembly in Yeouido, western Seoul, to prevent nearby protestors from possibly marching into parliamentary premises.

About 50 people in face masks and visors gathered near Yeouido Park after having their temperatures checked and writing down their names and phone numbers on a list. They chanted slogans and called on the National Assembly to amend labor laws to improve working conditions.

At 3 p.m., the KCTU and other left-leaning civic groups gathered for another rally demanding similar improvements, which happened in 13 different places in Seoul. The protests mostly wrapped up before 5 p.m.

Nationwide, no clashes were reported between police and protestors. Police estimate roughly 3,000 people joined the demonstrations in Seoul, while protests outside the capital attracted 9,700 participants.