What's in a gaze? When it comes to Lee Jung-eun — a lot

What's in a gaze? When it comes to Lee Jung-eun — a lot 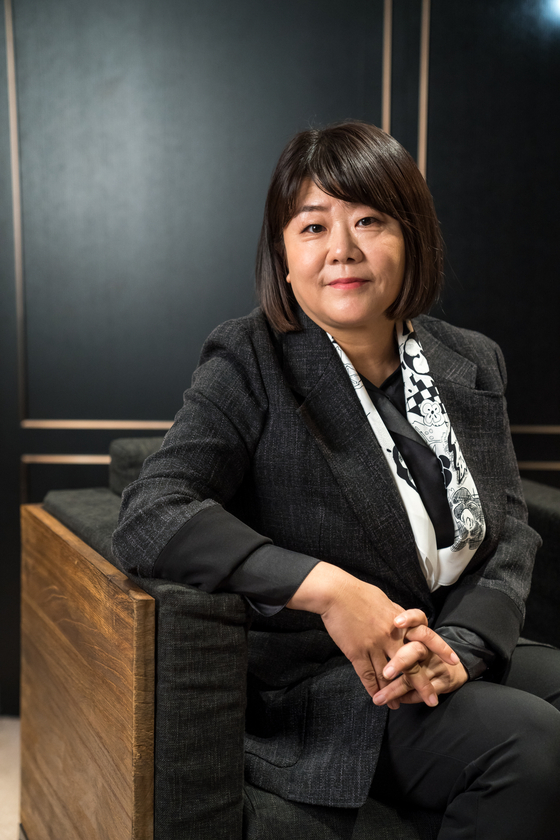 
“The Day I Died: Unclosed Case” revolves around Hyun-soo, played by Kim Hye-soo, who is trying to get to the bottom of a case involving a missing girl named Se-jin. Se-jin is presumed dead after she jumps off a cliff on a remote island.

About an hour into the film, the face of one of the villagers living on the island that Hyun-soo is questioning starts to stand out. Everyone calls her Suncheondaek and she is said to be the last person to see Se-jin before she disappeared.

Suncheondaek, who is played by award-winning actor Lee Jung-eun, can not speak after drinking pesticide while in a state of depression and loses her voice. She dutifully takes care of her nephew who is completely paralyzed.

Among the many adults that Se-jin encounters, Suncheondaek is the only one who offers a silent, but helping hand to Se-jin. 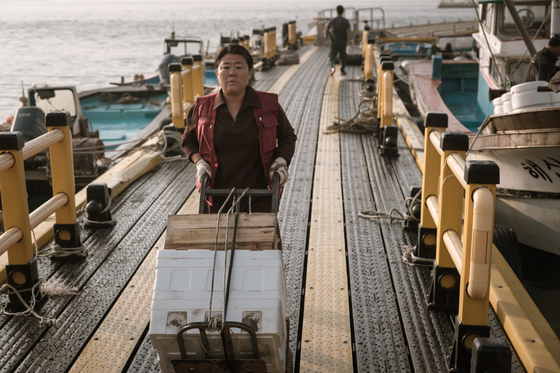 Samcheondaek, played by actor Lee Jung-eun, is a resident on the island who cannot speak and the only adult who helps Se-jin in the film "The Day I Died: Unclosed Case." [WARNER BROS KOREA]


“It’s actually very difficult to embed that kind of history [into a role] but coincidentally, I was able to adapt more easily [to the role] because for quite some time, I played a mother taking care of her disabled offspring for the play ‘Laundry [Bballae],’” Lee said in a press interview at a cafe in Samcheong-dong in central Seoul last week. “But I did wonder if there was an aunt who would do the same for her nephew, and I did ask director Park Ji-wan about that.

“She told me that she wanted to portray something different in a familial relationship,” Lee said. “The bond between a mother and daughter is an unquestionable and natural thing, but nowadays, families are segmented. That made me question if I could do the same [in Suncheondaek’s shoes] and my answer was yes. I actually do have an older brother, and if he wasn’t there to take care of my nephew then I think I would take responsibility.” 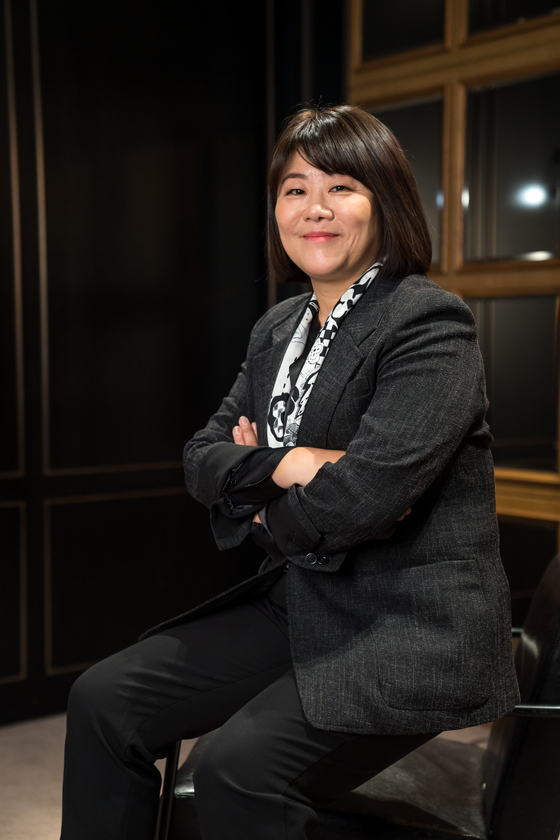 
From the haunting housekeeper Gook Moon-gwang that she portrayed in the Oscar-winning “Parasite” (2019) to the mother with a fierce maternal love for her daughter Dongbaek in the KBS drama series “When the Camellia Blooms” (2019), the actor switches her colors like a chameleon; she can be soft, fierce, humanistic, warm, comical, cold, maddening or haunting, all of which she manages to portray with just her gaze.

“I think my blank face is what some people would call sullen,” the actor said. “Others tell me that I don’t really have an expression, but when that kind of face breaks into a smile, or becomes emotional, that leaves an impact on people. I’ve played a lot of maternal or warm-hearted roles in the past, and when people recognize me for such roles I sometimes worry because they would see me as my characters, which I’m not. I can be gruff, and [in real life] I’m not that expressive.”

However the actor said that she was able to relate to her character, who in a way, can be seen as an idealistic adult who bonded with Se-jin and offers her help that she truly needs.

“You know when people say that dog owners only have eyes for dogs,” Lee said. “I think she [Suncheondaek] looks out for Se-jin, a girl around her nephew’s age, living alone on a remote island where she knows nobody. If she could, she would help Se-jin to spread her wings.” 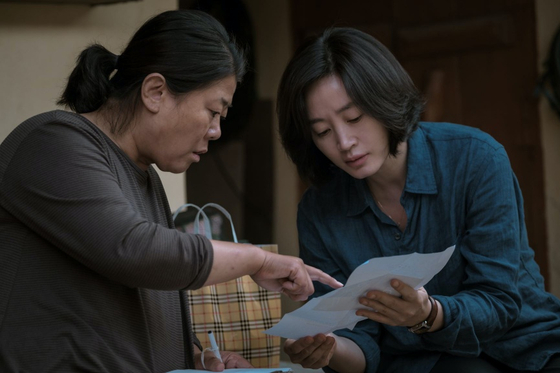 
The 50-year-old actor also dissected what it means to be a good grown-up.

“You never are ‘ready’ to be a good adult,” Lee said. “But what I do think about and try to do is that if I had moments where I wanted or needed others' help and I didn’t receive it, I look for those moments in other people's lives and if I can give help then I do. I think being a good grown-up means having the ability to spot moments where others really need help.”

In order to differentiate between helping and meddling, Lee recommends becoming a good listener, just like her character who cannot speak is.

“I think I too had moments where I didn’t wait for others to speak and I would talk first, but one time I had an acquaintance who came over with her child,” she said. “The child kept probing her mother and asking her all of these questions, as all children do, but the mother seemed to find it irksome. This other acquaintance played with the child instead, and she didn’t do anything special, just listened and reacted to the child’s talking. And I wondered why I couldn’t be patient like that, and realized how important it was to volume down and listen to others.” 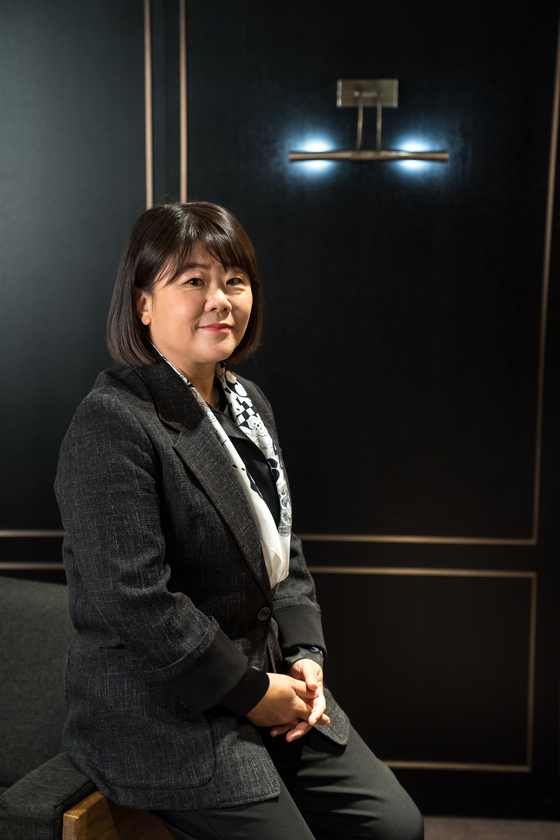 
When asked what she was looking for from her next acting gig, Lee’s answer was unexpected: she's looking for roles that don't stand out.

“I want to portray a normal person, someone who blends in with the crowd, instead of an impactful role,” Lee said. “I think, except for my roles in theatrical plays, I’ve mostly depicted strong characters. But it’s [just as difficult] to act out such calm, tranquil characters—it’s not easy to retain the prudent mood for a long time. I don’t have to be the main character. I can be more obscure.”

IU isn't who she used to be in newest film 'Broker'