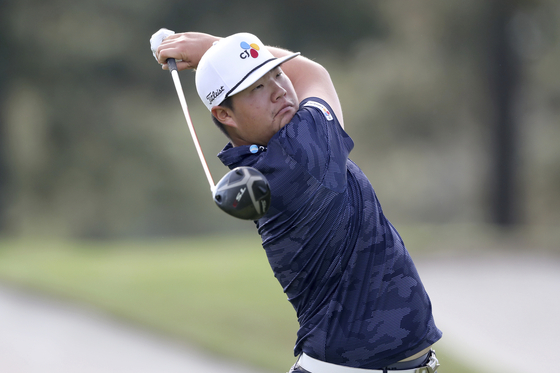 Im Sung-jae watches his shot during the final round of the Masters at Augusta National Golf Course on Sunday. [AP/YONHAP]


Im Sung-jae continues to surprise the world of golf.

The 22 year-old finished tied for second at The Masters at the Augusta National Golf Course on Sunday, the best-finish ever by an Asian golfer.

Having been assigned in the champions group on the final day with Dustin Johnson of the United States, Im shot three under par, 69, on the final day. His round comprised of five birdies and two bogeys. Due to this, Im ended up finishing five shots behind this year’s champion Johnson.

Johnson dominated the tournament, finishing with a tournament record of 20 under par, 268, to win. Im still made headlines among Asian golf fans with his tied for second finish with a four-round total of 15 under par, 273.

Before he made history with a runner-up finish, just playing in the final group at The Masters made Im the first-ever Korean to play in the champion group at the prestigious major tournament.

His performance makes it even more impressive, considering this was the 22 year-old’s first appearance at the tournament.

“Since this was my first Masters, my goal was just to make the cut,” Im was quoted as saying on Yonhap. “But I think I gained some confidence after staying in contention through the first two rounds. I’ll remember this day for a long time.”

Prior to Im’s runner-up finish, K.J. Choi held the record for the best finish among Asian golfers at The Masters, finishing third back in 2004.

With Johnson and Im both making history, there were a lot of “firsts” during this year’s Masters. For the tournament itself, this was the first time in history that the Masters was held in November. The tournament is normally played in April but was postponed due to the coronavirus.

Also with a runner-up finish at The Masters, Im saw a big jump in the world rankings. He moved up seven spots, from 25th to 18th, to crack the top 20. This is also his career high world ranking as his previous high was 20th.

However, Im wasn’t able to become the highest ranked Asian golfer, as Hideki Matsuyama of Japan moved up a spot to 17th in the world in the latest ranking.