Freight business is booming as Pantos takes to the rails

Freight business is booming as Pantos takes to the rails 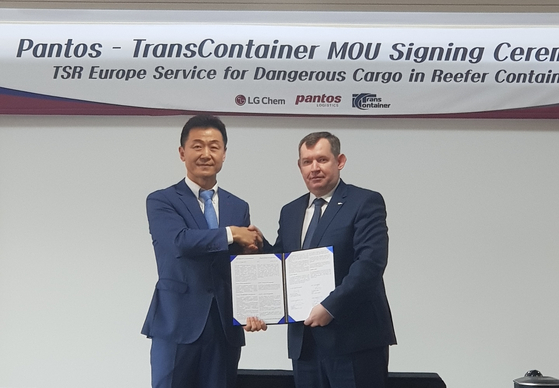 Lee Yong-ho, director of Pantos Logistics, shakes hands with a representative of TransContainer during a memorandum of understanding (MOU) ceremony in January for an exclusive contract for TSR railroad transport. [PANTOS]


Pantos Logistics, a subsidiary of LG Group, has been thriving in the midst of the coronavirus pandemic. The recent success of the company is due to its railroad logistics network and rising shipping costs.

According to logistics industry experts on Monday, Pantos is currently looking to increase freight delivery frequency from the current three to four times a week to seven days a week. The current schedule has already been expanded from once a week.

The biggest cause of the company’s windfall gain is the spike in shipping costs to Europe. Railway delivery is around 20 days faster than marine transportation, but remains relatively expensive. However, as shipping costs rise, railroad freight delivery now has a competitive advantage for price.

The Shanghai Containerized Freight Index (SCFI), which is a barometer of ocean freight rates, is at its highest point ever at the moment. Last week, the SCFI was 1,857.33, which is 192.77 points, or about 10 percent higher than the week before. The value is the highest since relevant data started being collected in October 2009.

Shipping costs for America and Europe, which are Korea’s major export countries, have been on a sharp rise. The freight charge for shipping on the west coast of the United States jumped as high as $3,887 for a forty-foot equivalent unit, which is the size of a shipping container that measures 40 feet long, 8 feet wide and 8 feet tall.

“When shipping companies allocate freight space, they prioritize short-term contracts for the premium price they pay, after one-sidedly canceling the contracts that were already signed,” said an employee in the automobile parts industry that wished to remain anonymous. “The reality is that big firms on long-term contracts wait until they receive the freight space that shipping companies designate every day.”

The spike in prices for marine transportation was not expected. However, there are now a lot more companies that contact Pantos about railroad delivery or request its services as the trans-Siberian railway (TSR) is emerging as an alternative to shipping for exports to Europe.

Kumho Tire, which has shipped tires to European car manufacturers for several decades, recently started using railroad transport for the first time in the company’s history. Ever since the company hasn’t been able to ship tires manufactured in China, it has been using Pantos’ services to send them to Europe via the TSR.

“Because we need to pay an enormous amount of compensation for supply shortages, we found an alternative way,” said a spokesperson for Kumho Tire.

According to Pantos, the companies inquiring about TSR transport range from SMEs to big businesses and are spread across different industries. Companies that have requested Pantos’ services produce electronic parts, displays, batteries, clothes, textiles, packaging materials and e-commerce products.

“We cannot disclose any information about our clients,” said a spokesperson for Pantos. “However, we have been getting orders from companies and industries that have not previously used railway transport.”

“Logistic companies under big firms are also going through an emergency, where they are struggling to comply with delivery deadlines,” said a person in the logistics industry who wished to remain anonymous. “Due to this situation, those companies have been asking Pantos if they can also deliver through the TSR.”

During the third quarter, Pantos' operating income was 48.2 billion won ($43.6 million), surpassing projections. The logistics industry predicts that shipping costs will not return to their normal levels until the Lunar New Year in 2021.

“The efforts to create an international logistics network, combined with the instability of shipping prices, led to positive results,” said a spokesperson for Pantos.