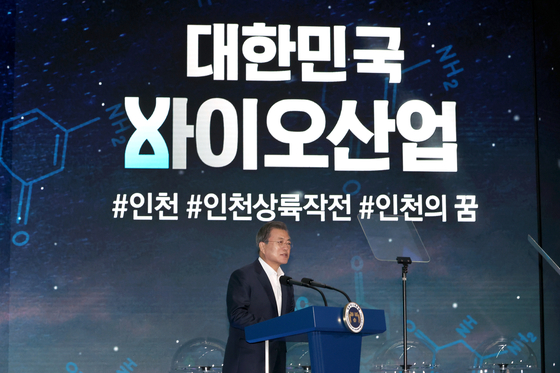 
Korean coronavirus treatments could be available by the end of this year, President Moon Jae-in said Wednesday.

“Vaccine and treatment developments [for Covid-19] have shown progress,” Moon said in a speech at a biopharmaceutical and health care event in Songdo, Incheon, on Wednesday. “As early as the end of this year, antibody and plasma drugs could be introduced to the market.”

However, Korea has no supply agreement with either company, unlike the United States, European Union and Japan.

The Korean government said it is negotiating with several global pharmaceutical companies for vaccinations for 30 million people, or 60 percent of the total population, by the first half of 2021.

“We are currently in the process of negotiating with all of the leading [drug] companies that are showing major results, and we expect there wouldn’t be a major problem in achieving our goal,” Kang Do-tae, vice health and welfare minister said Wednesday. “If possible, we will announce detailed plans for securing the vaccines within this month.”

At the biopharmaceutical and health care event Wednesday, the government announced that 36 major drug developers including Samsung Biologics and Celltrion as well as five venture capital investors will be investing 10 trillion won ($9 billion) by 2023 in boosting the industry.

Songdo has become the epicenter for Korea's biopharmaceutical industry. Some 60 companies in the industry work there, employing 7,000 people.

The goal of the announced investment is annual production growth of 20 percent in the biopharmaceutical industry and health care and the creation of roughly 9,300 jobs.

“We have broken through [past] notions that it is difficult for an emerging country to become a major power in the bio[pharmaceutical] industry,” Moon said. “We are showing the world ‘K-bio’ potential by overcoming the coronavirus.

“We are breaking into the global bio[pharmaceutical] market that was strongly held by the U.S. and European countries.”

Moon said the reason for focusing on biopharmaceuticals and health care was clear.

“It is an industry in which we can excel,” Moon said.

He stressed that biopharmaceuticals has always been an industry looking to a “new future.”

“Personalized treatment through genetic information analysis and development of new drugs through artificial intelligence is now a reality,” Moon said.

The president noted the potential of the industry.

“The global bio[pharmaceutical] and health [care] market is expected to grow more than 4 percent annually by 2030,” Moon said. “In particular, the new market for digital health care, medical big data and medical artificial intelligence is expected to see significant annual growth exceeding 20 percent once the convergence of bio[pharmaceutical development] and the latest technologies gains momentum.”

Of the 10 trillion won in investment announced, 8.4 trillion won will come from private companies and go into drug development. The balance will be used for the development of medical equipment and healthcare.

The government said it has set its own research and development (R&D) budget for next year at 1.7 trillion won, a 30 percent increase compared to this year’s 1.3 trillion won.

The R&D will be aimed at developing “blockbuster” new drugs, which could generate a minimum of 1 trillion won of revenue a year.

The government vowed to support the establishment of health and medical big data as well as expand research cooperation in other areas including electronics, chemistry and energy.

Other plans that were announced included fostering 47,000 talents in the biopharmaceutical industry by 2025, not only drug and medical equipment developers but also people that specialize in data analysis and artificial intelligence.

The government said a new biopharmaceutical talent center at Yonsei University’s campus in Songdo will play a significant role.

As of October, medical drugs and equipment exports amounted to $10.8 billion this year, according to the government, a record amount.

Total exports of those products for 2019 amounted to $8.91 billion.

“Korea’s bio[pharmaceutical] exports including drugs and medical equipment have been growing for 14 consecutive months while overall exports have been shrinking,” Moon said.

As of the third quarter of this year, the total number of people working in the health industry was 941,000. Roughly 30,000 new jobs were created this year. 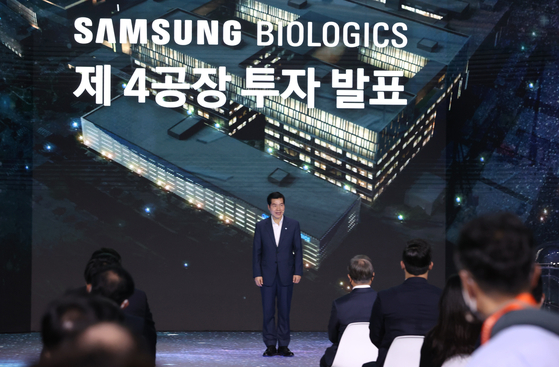 
Samsung Biologics on Wednesday held a groundbreaking ceremony for construction of its fourth plant in Songdo. The plant, which will be completed in 2023, is expected to be world’s largest biomanufacturing plant, surpassing its third plant, which was completed in 2018.

Samsung Biologics will be investing 1.7 trillion won in the plant. 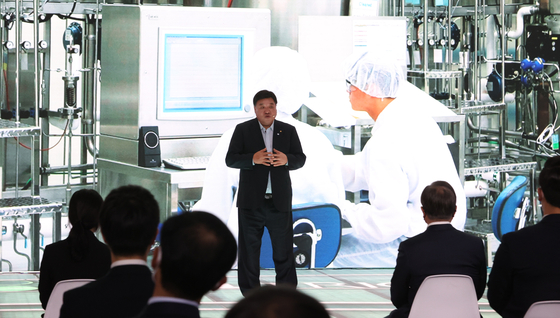 
Celltrion, another major drug developer, also held a groundbreaking ceremony for its third plant and a research center.

The third plant is expected to be completed by 2023 and the research center by 2022.

The third plant will have a capacity of 60,000 liters. Celltrion's total production capacity will amount to 250,000 liters.

The drug company will be investing 500 billion won in the construction of the plant and research center.