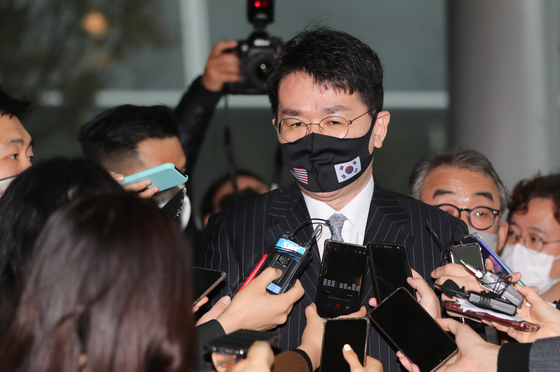 
Following a barrage of criticism from lawmakers and shareholders about the acquisition of Asiana Airlines by Korean Air Lines, Hanjin KAL Chairman Cho Won-tae offered only a few clipped and incomplete responses to questions regarding monopoly, government favoritism and the wishes of a coalition owning the largest block of Hanjin KAL’s stock.


“I disagree,” he said when asked about favoritism by the government.

His remarks were made to reporters Wednesday during a Korea-U.S. business leader conference, two days after Hanjin KAL announced Korean Air Lines will acquire Asiana Airlines with support from Korean Development Bank (KDB).

Cho insists that support from a government-owned bank doesn’t amount to preferential treatment, and he dismissed questions about the lack of competition, the possible loss of jobs and a possible decline in the quality of service.

“There could be concerns” about monopoly, Cho said on Wednesday. But “there won’t be any [decline] of customer convenience or increase in price.”

“It’s true there are a lot of overlapping routes and workforces of the two airlines. But considering the [business] expansion, [overlapping workforces] could be fully made use of,” he said. “There aren’t plans for layoffs. [I] will create an opportunity to be able to embrace every employee as family.”

To a question about what he will do about Korea Corporate Governance Improvement (KCGI) and its refusal to support the acquisition, Cho only offered this: “There’s no plan.”

KCGI and allies — including Hanjin KAL shareholder Cho Hyun-ah, who is the chairman’s sister, and Bando Engineering & Construction — own around 46 percent of Hanjin KAL shares.

KCGI has been strongly opposing the acquisition, and has said taxes are being used for the benefit of Cho, who holds around 41 percent of Hanjin KAL with his allies, assuming Delta Air Lines votes with Cho.

The Atlanta-based carrier owns 14.9 percent of Hanjin KAL. While it has not explicitly offered its support, it is assumed that it will vote for stability and continuity. Without Delta, Cho and related parties control less than a third.

To make the acquisition possible, KDB will invest 500 billion won ($453 million) in Hanjin KAL and buy 300 billion won of the company’s exchangeable bonds.

The acquisition is expected to be completed by June next year if the procedure goes smoothly, following the approval of Korea’s Fair Trade Commission and authorities abroad.

The acquisition has been challenged by some politicians.

People Power Party interim leader Kim Chong-in said the government should not get itself involved in business matters in such way.

“KDB tends to think [the financing of the acquisition] is not a big issue,” said Kim on Tuesday. “Problems at Asiana Airlines already occurred before Covid-19, and this kind of situation wouldn’t have happened if they had been solved properly.”

Lawmakers from the ruling Democratic Party held a press event on Tuesday opposing KDB’s financing of the acquisition.

Representatives including Lee Yong-woo, Min Byoung-dug and Min Hyung-bae said in a statement that the transaction raises concerns about whether public funds are being used to support Cho Won-tae’s control of the company.

They added, “There are also concerns that the public’s taxes are being used for Korean Air Lines’ family as well as shareholders and creditors of Asiana Airlines that should be responsible for the problems, and further the monopoly of the airline industry.”

Revenues for the combined entity is estimated at 15 trillion won. It will become the world's No. 7 carrier by capacity to transport passengers and cargo, according to 2019 International Air Transport Association numbers provided by KDB.