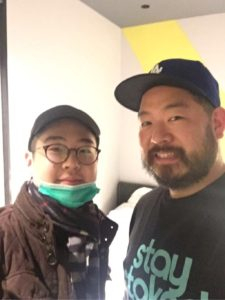 Kim Han-sol, left, the son of Kim Jong-nam, poses with Free Joseon member Christopher Ahn in a selfie taken days after he left Macau in 2017. Kim Jong-nam is the older half brother to North Korea's leader Kim Jong-un, and was killed with nerve poison in Malaysia. [FREE JOSEON]


The son of Kim Jong-nam, the assassinated older half brother to North Korean leader Kim Jong-un, was taken into CIA custody after an elusive anti-Pyongyang group tried to help him escape to Amsterdam, according to an investigative report published by the New Yorker on Monday.

Korean-American writer and journalist Suki Kim detailed in her report how the group helped Kim Han-sol, his sister and their mother flee their home in Macau a day after his father Kim Jong-nam was murdered by agents in a Malaysian airport in February 2017. Her reporting relied on years of interviews with members of the activist group Free Joseon, according to the story.

Free Joseon is also the organization allegedly responsible for a brazen raid on Pyongyang’s embassy in Madrid in February 2019, in which they stole computers and thumb drives reportedly containing sensitive information before successfully escaping to the United States.

Free Joseon’s leader, Adrian Hong Chang, knew Kim Han-sol from an earlier encounter in Paris in 2013 and asked one of his contacts Chris Ahn to meet the young man and his family in a Taipei airport two days after the assassination, the New Yorker reported.

Ahn and the group found a country willing to take the family in, and arranged for them to take a flight to an airport near Amsterdam, but they were stopped from boarding the plane, the report said. Two men claiming to be CIA agents met Ahn in the airport asking to see Kim Han-sol, but Ahn declined to arrange the meeting.

Eventually the group found a plane Kim Han-sol and his family could board to Amsterdam, and arranged for group members to meet them at their destination. But they never came out of the terminal gate. Citing multiple anonymous sources, Suki Kim said the CIA took the family into its custody and moved them to an undisclosed location.

Kim Han-sol’s current whereabouts remain unknown. His last public appearance was in a video clip released by Free Joseon weeks after his disappearance, in which he thanked the group and its leader Adrian Hong, for their help.

Ahn told Suki Kim that the video, as well as a selfie he took with Kim Han-sol, were “an insurance policy” to prove the group was not kidnapping the family.

Sporting knives, iron bars and fake guns, Hong and several other activists allegedly invaded the embassy under false pretenses and restrained employees — beating one of them up — and held them captive for hours before escaping in embassy cars with computers from the buildings.

Hong later turned over the computers to the FBI, believing they could crack the encryptions, according to the report. The activist told Suki Kim the FBI initially gave Free Joseon its tacit support, but turned on the group after the raid.

Hong remains at large after U.S. authorities issued a federal warrant for his arrest in April 2019 in connection to the embassy raid. He is also wanted in Spain for the attack.

Ahn, who also allegedly took part in the raid, was arrested in California in April last year but was released on bail in July.

Suki Kim is a best-selling author and journalist, and one of the only people in the world to have lived undercover in North Korea, about which she published a book, “Without You, There Is No Us” in 2014.