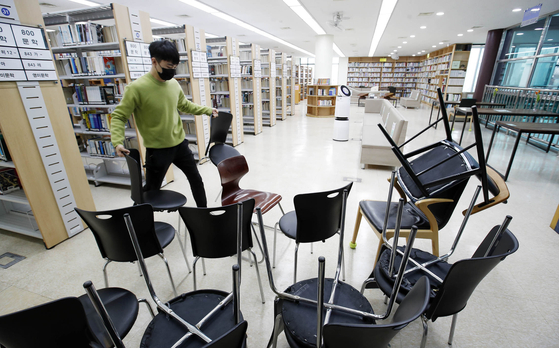 Day-to-day infections have been steadily rising since late last week, but Tuesday’s increase was especially alarming because the country hadn’t seen more than 300 cases since Aug. 28.

Last Thursday, 191 people were diagnosed with the coronavirus nationwide, followed by 205 Friday, 208 Saturday, 223 Sunday and 230 Monday, according to data from the Korea Disease Control and Prevention Agency (KDCA).

Of Tuesday’s total new cases, 245 were local infections: 91 in Seoul, 81 in Gyeonggi, 15 in South Jeolla, 12 in North Gyeongsang, nine each in Incheon, Gwangju and South Gyeongsang, six in South Chungcheong, five each in Busan and Gangwon, two in Daegu and one in Daejeon.

The remaining 68 cases were imported: 23 from the United States, 17 from Russia, 11 from Mexico, four from Argentina, three from Poland, two each from Germany and Hungary and one each from the Philippines, Kazakhstan, Pakistan, Japan, Italy and Egypt.

Two patients died Tuesday, raising total deaths to 496, while 113 patients recovered, bringing total recoveries to 25,973. As of Tuesday at midnight, Korea had counted 29,311 coronavirus patients in all.

Tuesday’s imported cases were the highest since July 24, in what health authorities analyzed to be the result of surging infections in the United States, Europe and the Middle East.

Kang Do-tae, second vice minister of health and welfare, grimly said in a Wednesday press briefing that the virus was spreading quickly in local communities and that Korea stood at a critical juncture of possibly facing a big outbreak.

While no big Covid-19 clusters have emerged in recent weeks, sporadic cases popping up all over the country have been leading to numerous chains of infections, mostly in the greater Seoul area encompassing Seoul, Incheon and Gyeonggi.

“Cases are emerging in gatherings of friends and family, companies, restaurants, bars, saunas and other places, not in any particular type of facility,” said Kang. “In the greater Seoul area, [people] can get infected anytime, anywhere. It’s especially dangerous when several people spend hours in a confined, indoor setting where it’s difficult to wear a face mask.” 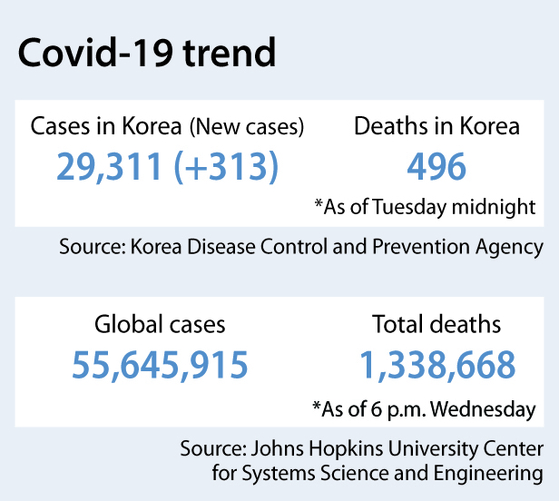 As to why the number of small chains of infections was rising now, central health authorities pointed out that it appeared more people were spending time indoors amid dropping outdoor temperatures, often in places with poor ventilation.

On top of that, about 52.2 percent of all infections counted over the past week were people below the age of 50, who tend to have few or no symptoms of the virus, which means they inadvertently transmit the disease to others, officials said.

From Sept. 13 to Oct. 10, out of all people who were diagnosed with the coronavirus, 38.3 percent were aged below 50, according to government data. From Oct. 11 to Nov. 7, the corresponding portion was 49.1 percent.

As cases continue to climb, the central government announced Tuesday that the social distancing level for the greater Seoul area would be raised by a notch to Level 1.5, with new restrictions going into effect Wednesday midnight in Seoul and Gyeonggi, and on Nov. 23 in Incheon.

The measures will last until Dec. 2, after which the central government will decide whether to bring the social distancing level back to Level 1 — or if the situation worsens, crank it up to Level 2.

In light of the fact that almost all recent cases coming from the greater Seoul area have been traced to Seoul and Gyeonggi, health authorities said Incheon will be subject to slightly looser restrictions in Level 1.5.

Incheon’s Ganghwa County and Ongjin County, which are barely seeing any new cases, will remain at Level 1.

The central government decides social distancing levels for each region of the nation, but local government offices have some discretion to adjust their levels after consultation with central health authorities, which is what some cities have done so far to raise themselves to Level 1.5 measures, including Cheonan and Asan in South Chungcheong; Wonju in Gangwon; Suncheon, Gwangyang and Yeosu in South Jeolla; and most recently, Gwangju and Cheorwon County, Gangwon.

Level 1.5 restrictions in Gwangju and Cheorwon County are scheduled to go into effect Wednesday midnight.

Other than these self-imposed cities and the greater Seoul area, the rest of the country remains at Level 1.

Under Level 1.5 measures, dancing and table-hopping are strictly forbidden in clubs and other nightlife businesses, and eating is not allowed in noraebang (singing rooms). Restaurants, cafes, indoor gyms, hagwon (private cram schools) and other crowded facilities must take additional measures to prevent the spread of the virus, such as putting up dividers, spacing out customers by leaving every other seat or table empty, or capping the number of people allowed entry at a time.

Other restrictions include limiting the number of people allowed in sports stadiums, schools and houses of worship.

Health authorities Wednesday urged the public to wear face masks and practice social distancing at all times, saying that’s the only way to prevent the spread of the virus when the world doesn’t have a vaccine.

Second Vice Health Minister Kang said Korea was currently in talks with pharmaceutical companies making major breakthroughs in vaccine development, adding the government “will have no problem” reaching its goal of securing 30 million doses by next year.

Purchase details are expected to be laid out by the end of this month, Kang continued, yet the procurement process could take “a significant amount of time."