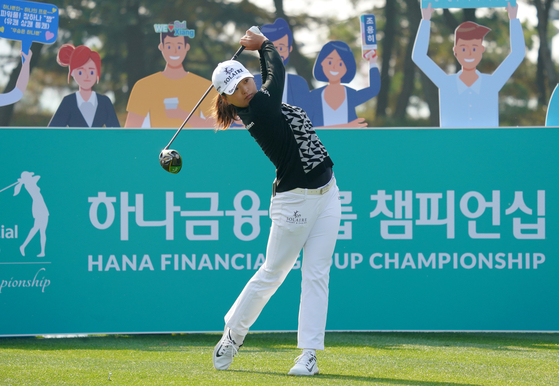 Ko Jin-young watches her tee shot during the third round of the Hana Financial Group Championship at SKY72 Golf & Resort Ocean Course in Incheon on Nov. 7. [YONHAP]


World No. 1 Ko Jin-young is finally returning to the LPGA Tour.

Starting Thursday, Ko will compete at the Pelican Women’s Championship presented by DEX Imaging and Konica Minolta at Pelican Golf Club in Florida. This is her first tournament of the 2020 season, as she’s been staying in Korea due to the coronavirus pandemic.

This is going to be her first LPGA Tour appearance in almost a year, as she last competed at the CME Group Tour Championship, the season finale, in November last year.

While Ko stayed in Korea, she did manage to take some time off from competitive golf, but she made sure not to miss the whole season, as she competed at six KLPGA Tour events.

Ko made the cut in all six tournaments and finished 14th on the KLPGA Tour’s money ranking.

But six tournaments as of November are significantly less than a normal year.

“It’s so different [to] last year,” Ko was quoted as saying on the LPGA website. “Because last year I had a lot of tournaments, maybe over 20 events, but this year I have just five [sic] events. So I need to find [the] feeling on the course. It is tough, but it’s getting better, better and better.”

Looking at the number of tournaments, Ko didn’t even compete in as many as the other LPGA golfers that also stayed in Korea. During this time, Ko said that she has worked on making some changes to her swing.

Ko headed to the United States right after the Hana Financial Group Championship and is expected to compete at least until the U.S. Women’s Open, which is scheduled to run from Dec. 10 to 13.

Ko has not yet earned her spot in the season finale, the CME Group Tour Championship, as the top 60 players in the season-long race to the CME Globe points standing get to compete at the tournament.

At this week’s inaugural LPGA Tour tournament, Ko will start her first round at 11:48 a.m. local time on Thursday, or at 1:48 a.m. on Friday morning, Korea time. The world No. 1 will start her round from the first tee, playing alongside Ally McDonald of the United States and Sophia Popov of Germany.

Due to Covid-19, the tournament will once again be played without any spectators on the course.